After a night of silence,  Jaromir Jagr, who left Friday’s game against the New York Islanders, was seen on the ice in a normal jersey for today’s practice session prior to the team leaving for a five game road trip that starts Sunday in Detroit. Panthers TV play by play man Steve Goldstein and beat writer Harvey FIalkhov tweeted about Jagr’s participation for today’s workout. The story from nhl.com is below:

We now return to our normal activity.

SUNRISE–After nine straight shooters scored in a shootout, Florida Panthers goalie Roberto Luongo stopped Josh Bailey to give the Panthers a 3-2 win over the New York Islanders Friday night at the BB&T Center. Aleksander scored for the Panthers in the fifth frame for the margin of victory. The win evened Florida’s record to 2-2-1 on the homestand they just completed and leveled their season record at 9-9-4.

Brandon Pirri scored a goal from the top of the right circle with the defense backing toward the Islanders net. Pirri’s hard shot  was deflected in by an Isalnder. Jaromir Jagr got  an assist on the goal after hitting Pirri in stride with a pass. It was Jagr’s 10th assist of the season and raised his team leading point total to 18. It was also career assist 1090 and career point 1820. Here are Friday night’s highlights from nhl.com:

Jagr’s night was shortened  after a collision with a Panther and no reason was offered by the team after he skated a few shifts in the third. Updates on his condition will provided after he his reviewed by Florida’s medical team.

Today’s graphic is from an article in the Canadian magazine Sportsnet, which is previewed in links after the Jagr-O-Meter and the updated Atlantic Division standings. 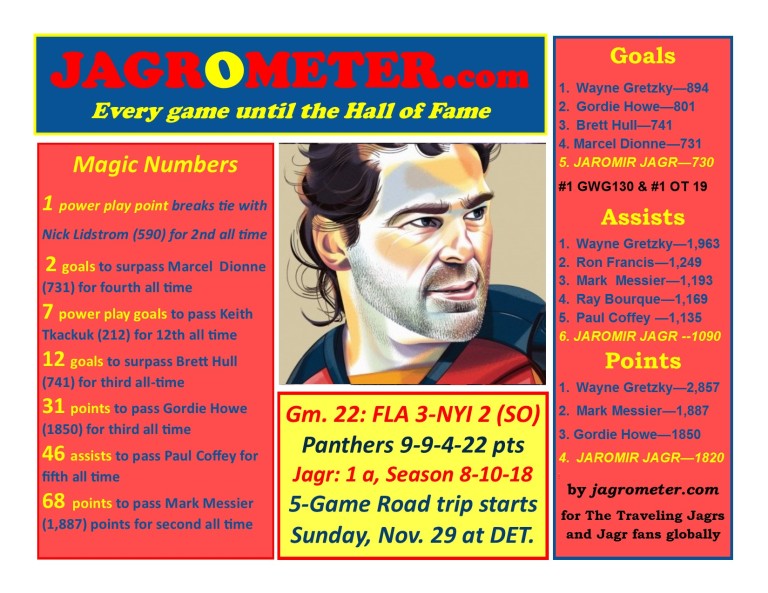 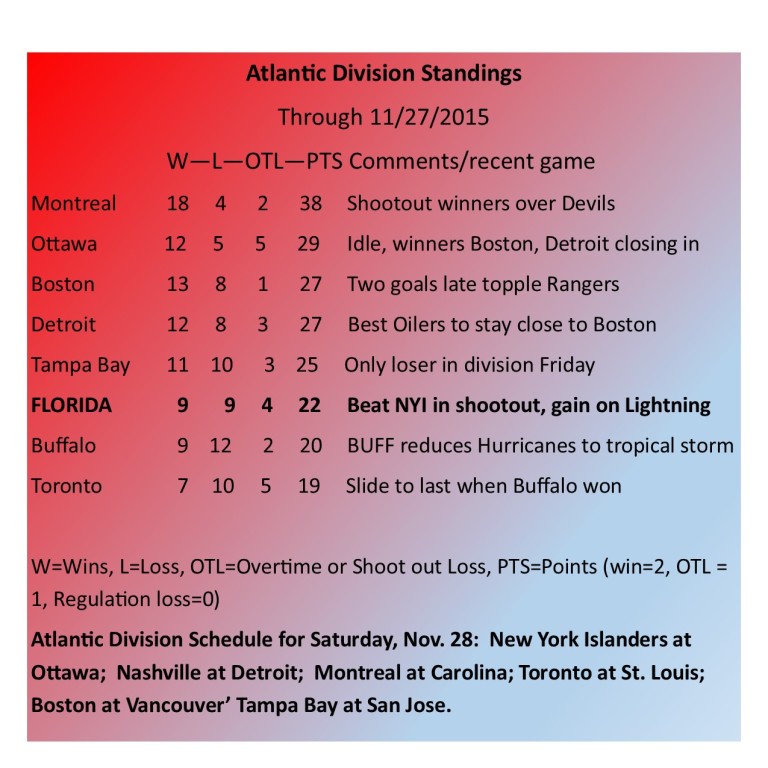 There’s was a lot of excitement and commentary on Twitter regarding the sportsnet article. Thanks to the page followers who have tried to send me the link in email and tweet. The efforts will continue. One person was able to buy the on-line edition. Maybe we can master this internet thing.

Sportsnet magazine, in Canada, has an article on Jagr, which is previewed at this link: