(SUNRISE)–Shane Harper scored his first two NHL goals, while Jonathon Marchessault assumed the team lead in scoring with two points for seven on the season in Florida’s 5-2 over Colorado Saturday night at BB&T Center.

Jaromir Jagr recorded the 1121th assist of his career on Aaron Ekblad’s go ahead goal in the second period. Jagr now has 1871 career points and needs 16 to tie Mark Messier as the NHL’s second all-time leading scorer. 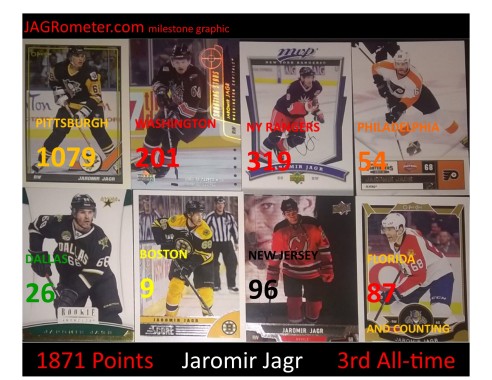 Jagr will tie Scott Stevens with 1635 career games played with his next appearance, expected to be Tuesday night in Pittsburgh when the Panthers play the Penguins at PPG Paints Arena (formerly Consol Energy Center–same building, new name). The Panthers will also visit Toronto (Oct. 27), Buffalo (Oct. 29) and Detroit (Oct. 30) on their first lengthy road trip of the season. The Panthers hit the road with a 3-1-1 record for 7 points, and trail Montreal (4-0-1-9) , Tampa Bay 4-1-0-8) and Detroit (4-2-0-8) in the Atlantic Divsion.

The Jagr-O-Meter tracks the milestones jagr is trying to reach this year and is presented after every Florida Panthers game. Tickets for some road and all Panthers games can be secured safely through panthers.nhl.com.

From the recently-announced instagram page that already has nearly 49,000 world wide followers…

Jagr skating helmetless, one of the few players to do so, before the Panthers win over Colorado.

If you missed the Oct. 15 game with Detroit at BB&T Center, you missed Jaromir Jagr Bobblehead night. Ebay can come through where friends did not.

Checking ebay late Saturday night following the win over the Avalance, auction prices were in the $45 range including shipping, while other sellers had buy it now prices ranging from $55-$65. A scan of the list may say some saavy buyers a few dollars as they look at prices that are still in the high $20s plus shipping.

Make plans to see the legend this season

Be sure to check out our other posting on catching the legend in action in Florida or at an arena near you our use the convenient link provided right here.