DETROIT–Brian Campbell fired a shot from the high slot on the rush to giver the Florida Panthers a 2-1 overtime, comeback victory Sunday afternoon over the Detroit Red Wings at Joe Louis Arena.

The Panthers Reilly Smith tied the game at 14:38 of the third period to erase Detroit’s 1-0 lead the Wings enjoyed since 7:02 of the second period when rookie Dylan Larkin  scored a breakaway goal off a Florida turnover.

Roberto Luongo won a battle of goaltenders stopping 28 of 29 shots while Petr Mrazek stopped 30 of 32 Florida shots in the loss. Highlights of the game from NHL.com are here: http://www.nhl.com/gamecenter/en/recap?id=2015020354&navid=sb:recap&intcmpid=sb-highlights

The victory sees the Panthers finish a rugged month of November at 5-5-2, and through two months Florida is 10-9-4 for 24 points. The afternoon contest was the only game on the NHL schedule today. Florida plays St. Louis Tuesday night in the second game of their five game road trip.

Jaromir Jagr played his normal shift but the Panthers high scoring top line was held off the board and were on the ice when Aleksander Barkov’s exit pass from the end zone was intercepted by Larkin.

The Panthers play the second game of their road trip Tuesday against the St. Louis Blues. 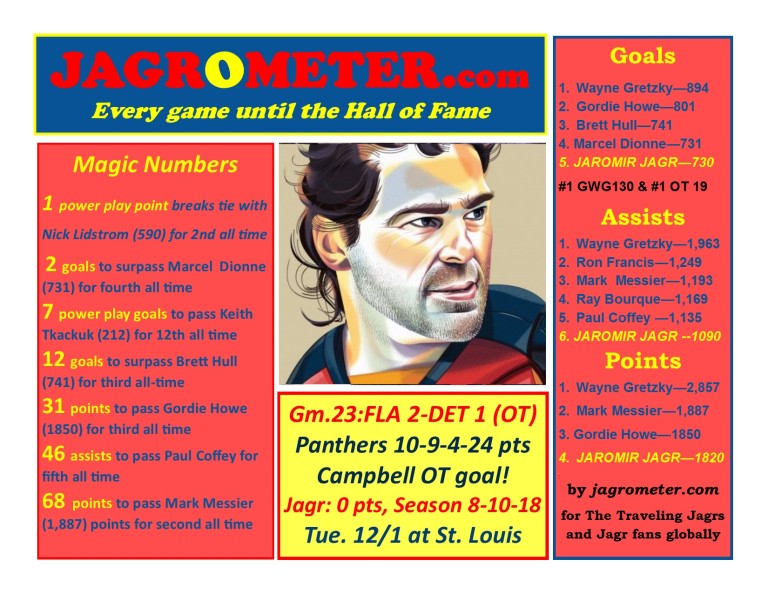 The above graphic portrait in the Jagr-O-Meter appears in the Dec. 7 issue of Canada’s Sportsnet magazine and was drawn by Nigel Buchanan.