SUNRISE–Jaromir Jagr scored his ninth goal of the in the first minute of the game as the Florida Panthers built a 3-0 goal lead and kept Washington  scoreless until late in the game to claim a 4-1 win over one of the NHL’s best teams.

Post-game interviews from floridapanthers.com. Great comments in his own words about catching Dionne as Jagr gets a couple segments in the clip.

Highlights of the game starting with Jagr’s team leading ninth  goal from nhl.com with the great Steve Goldstein can be seen here:

Fans on twitter can watch the goal on a loop from @NHLExpertPicks. (The link doesn’t reproduce well, so we’re directing to you it)

There were more heroes in Thursday’s game. Goalie Al Montoya stopped 19 of 20 Washington’s shots in playing another solid game in a rare start in place of Roberto Luongo. Montoya raised his record to 4-1-1, a nice markup for a reserve. Jagr said being a backup goalie is the hardest job in hockey.

Brandon Pirri scored his sixth of the season in the middle period. Aaron Ekblad also scored his sixth in a two-one with Jonathon Huberdeau in the third. While limited to three goals so far, Hubereau now has 14 assists.

The Capitals avoided the goose egg when an agitated Alex Ovechkin ripped his 14th from his customary left wing circle location, with 2:08 left in the game, less than a minute after leaving the penalty box. Logan Shaw added an empty net goal to close out the scoring. In all the Panthers had 26 shots on goal.

The Panthers (14-11-4-32) play at Boston Saturday in rare 1 pm start.  The Bruins (15-9-3-33) will try to hold on to fourth place. A regulation win by Florida would enable the Panthers to move past Boston. It’s the first of four on the road for Florida, who will make their first visit to Brooklyn Tuesday Dec. 15 to play the Islanders, New Jersey, Thursday, Dec.  17 and Carolina Friday, Dec. 18.

#CHASINGGORDIE1850: Jagr’s goal was his team-leading 21st point and 1823rd of his career as he aims to catch Gordie Howe’s third all-time total of 1850. 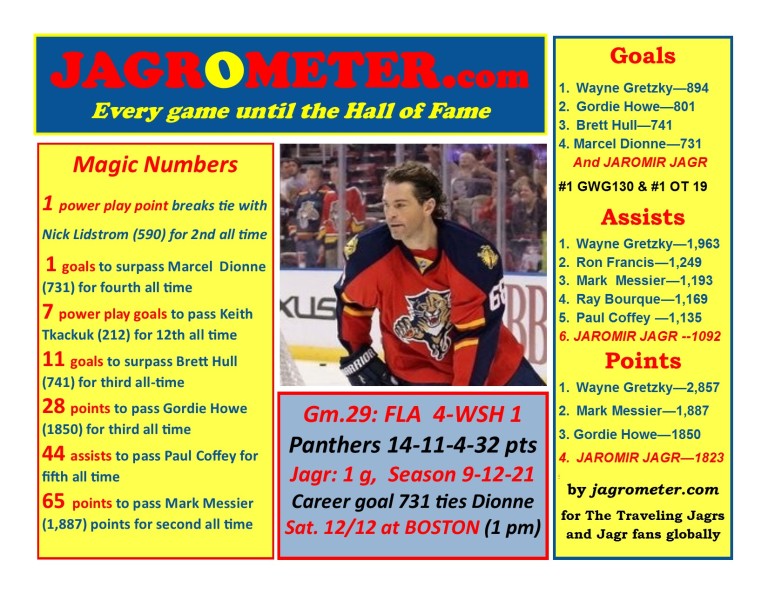