Jonathon Huberdeau paced the attack with two goals (9 and 10) and an assist. Florida also had goals by Vincent Trocheck (15) and Aleksander Barkov (14). Quinten Howden scored his sixth of the season into an empty net in the dying minutes.

Florida scored three in the first, and one in the second and had a 4-0 lead going into the third period. The Capitals scored two goals in the early minutes of the final period to cut their deficit but could get no closer as Panthers goalie Al Montoya stopped 36 0f 38 shots in the win.

Highlights of the game from the new NHL.com website can be seen here:

#ChasingGordie1850 #1100Assists: Jaromir Jagr had an assist for his 1099th career assist and his 1836th career point as he closes to within 14 points of Gordie Howe’s third all-time best total of 1850 points. Jagr removed himself from the game after a few shifts in the third period in what was described as lower body tightness. It was added that he could have returned if needed.  With a two-goal lead and the Capitals fighting to get back into the game, it was unusual to see Jagr out of the game as it was becoming competitive un. No official status for Thursday’s game had been issue Tuesday night.

The last 10 games were good to the Panthers and a little below best results for Jagr.

The latest Jagr-O-Meter for a full look of Jagr’s milestones. 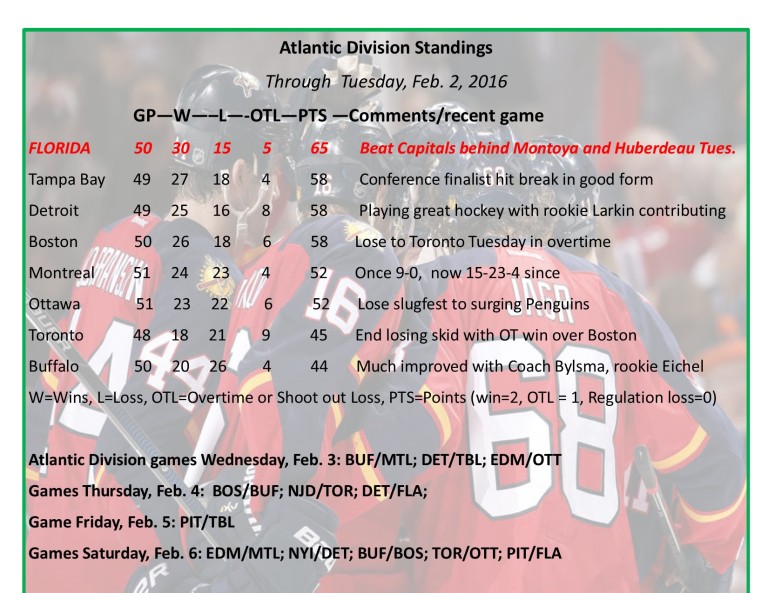 Florida hosts Detroit Thursday and Pittsburgh Saturday at BB&T Center. Tickets for these and all Panthers games are available through panthers.nhl.com.