COLUMBUS–Within days of decrying the NHL’s coaches challenge system as flawed, Columbus Blue Jackets coach John Torteorella successfully challenged an apparent Vincent Trocheck goal as being invalid due to offsides by Nick Bjugstad as the two were crossing the blue line. Using a tablet at the scorer’s table the officials overruled their original call to keep the score at   1-0.

One of our European readers disagreed with the call but under the rules regarding the way the NHL handles these situations, once the puck cleared the blue line the lead leg of Bjugstad was on the ice and in the zone while the trailing leg was not in contact with the ice even though it was in the neutral zone.

Trocheck scored minutes later and a dispute in the scoring was also brought to our attention as Alex Petrovic worked the puck ahead to him after receiving an end-line pass from Jaromir Jagr.  For some reason Garrett Wilson was awarded the second assist and his first NHL point on play where his only role was screening the goalie. Not that we expect any changes in the scoring, but JAGRometer.com contacted NHL.com for an explanation of this scoring decision and whether or not it can be changed.

Here’s the text of our inquiry to the NHL:

“Please forward to the appropriate office. I operate the website JAGRometer.com, where the results and stats of Jaromir Jagr are tracked for a world-wide audience. A scoring error was made during the Saturday, Feb. 27 game between the FLorida Panthers and the Columbus Blue Jackets. As shown in the attached NHL.com video, Jagr passes to Alex Petrovic, who then feeds to Vincent Trocheck, who scores his 19th goal of the season. The published stats show the second assist was awarded to Garrett Wilson. Wilson’s only role in the play was screening the goalie. JAGRometer.com received multiple inquiries from fans who noticed the mistake and after reviewing the video I have to agree. Can this error be corrected? This is potentially and expensive mistake if Jagr’s contract calls for bonuses for certain scoring totals and he comes up one point short. I await your response after reviewing your own video: https://www.nhl.com/video/trochecks-tally-pads-lead-in-2nd/t-278762356/c-41900903 (Please bear with the advertisement that preceded the video clip). 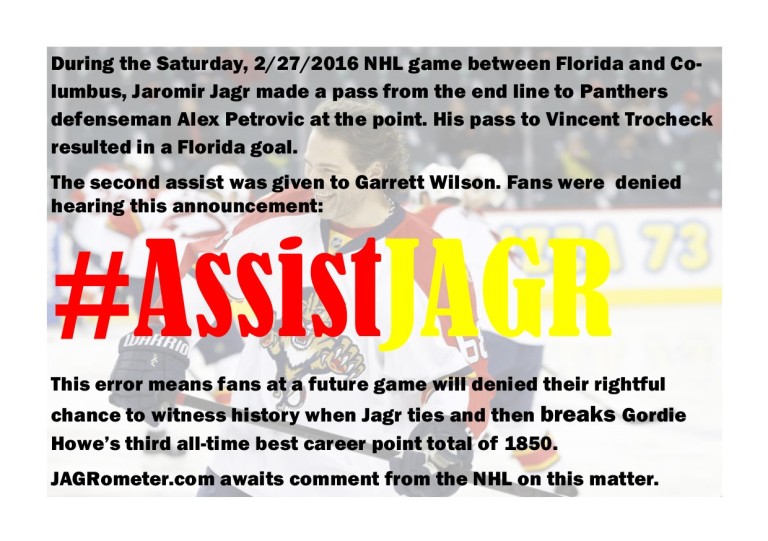 Earlier in the game Jagr did get an assist as he was all alone in the right faceoff circle and feathered a shot into the goal crease that pinballed in off Aleksander Barkov’s leg for his 19th goal of the season. With his team leading 45th point Jagr now has… 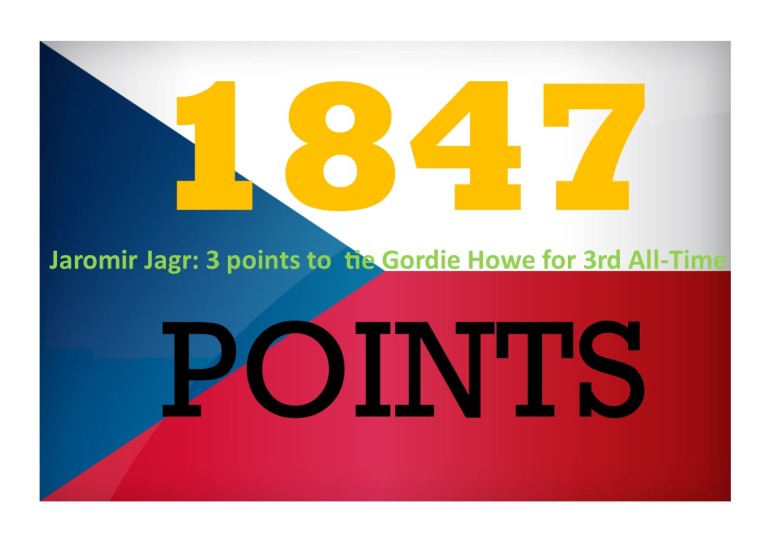 After trailing 2-0 Columbus reeled of three goals on 16 shots against Panthers goalie Roberto Luongo. as netminder apologists will tell you, it’s never the goalies fault. Traling 3-2 Florida was able to force overtime when Logan Shaw scored his fifth goal of the season to force overtime. A late delay of game penalty gave Columbus that carried into overtime. for 1:32.

The normally reliable shootout was the Panthers downfall Saturday as Barkov, Bjugstad and Trocheck were stopped by Columbus goalie Joonas Korpisalo, who kept his team in the game despite being outshot 13-1 in the first period. Scoring for Columbus were Scott Hartnell (20), Brandon Saad (24) and Seth Jones (2). Brandon Dubinsky scored the lone goal in the shootout to give the decision to Columbus.

A video summary and other information from NHL.com can be seen here;=:

Before the game Tortorella, impressed with Jagr is doing with Florida this year, suggested his young players introduce themselves to Jagr and see if they can’t pick up a few pointers.  On this Saturday Columbus weathered an early storm to take a lead, lose the lead then win in a shootout.

In other news, the Panthers were busy bolstering their roster with NHL talent as Florida general manager pried away Jiri Hudler (Calgary), Teddy Purcell (Edmonton) and Jakub Kindl (Detroit organization) for draft picks. More details of the transactions can be seen here:

The trades give the Panthers lockeroom even more of an international feel as Hudler and Kindl are from the Czech Republic. Grabbing two NHL forwards and a defensemen gives the Panthers NHL depth as injuries has struggled with AHL players in the lineup. 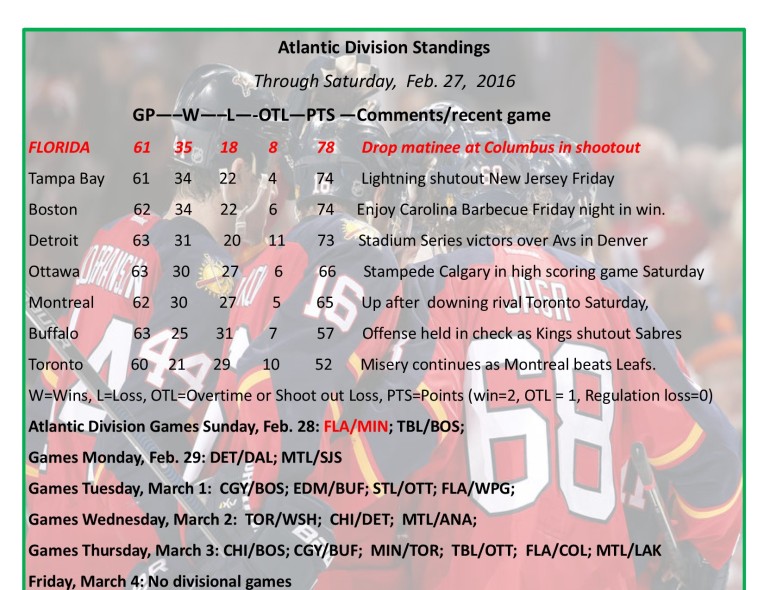 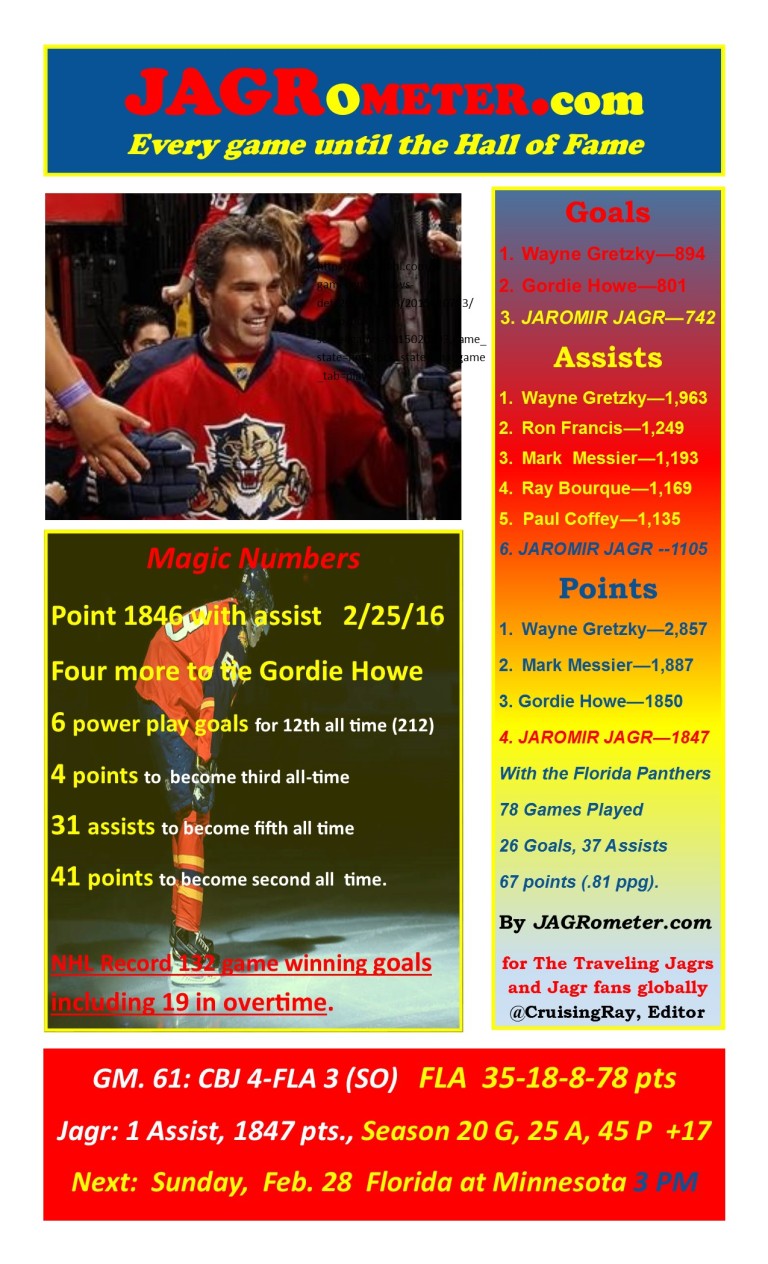