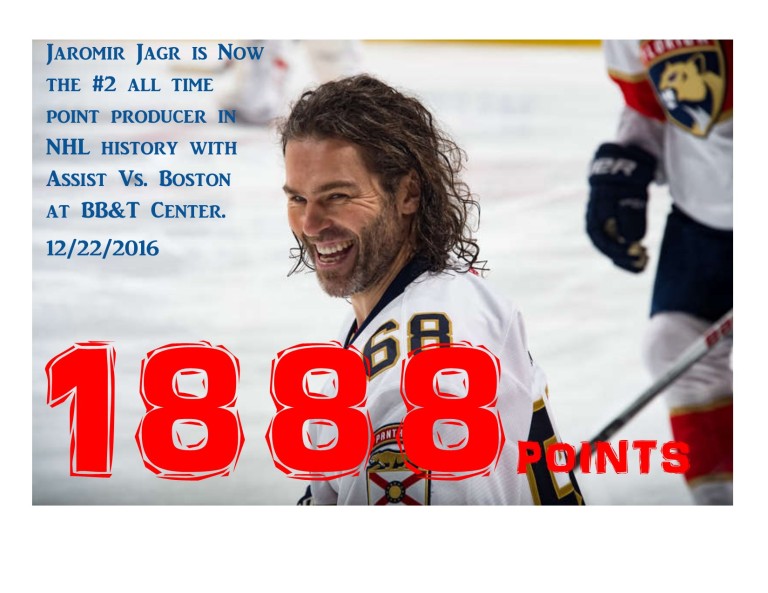 SUNRISE–The pride  of the Czech Republic is the second all-time point producer in NHL history.

Somewhere in the cloud are hockey highlights of many spectacular scoring plays by  the Czechoslavakian-born legend.  As world history has unfolded his native country has become two nations–Slovakia and the Czech Republic with the Czechs claiming Jagr.

The 1888th career point of jagr will not be remembered for its breathtaking beauty and of the powerful #68 skating the entire length of the ice. Instead it’s historical impact will be more noticed. A player would have to average more than a point a game for a 24+season career to match Jagr’s 1888 and counting points. No one playing today is on such a trajectory so it may be decades before someone with the skill, dedication and fortune of good health and complimentary teammates to duplicate the feat. Your jagrometer.com editor doesn’t expect to see it in his lifetime.

Jagr sits on the boards, now as the second all-time point producer in NHL history

Jagr acknowledges the crowd at BB&T Center for the ovation they gave him after scoring his 1888th point.

Jagrometer.com will continue to update the points by team placard that has been part of our coverage since Jagr was chasing down Gordie Howe for the third-spot all=time last season.

Lost in the edit of the official NHL highlights, is  Jagr’s self description of the play, which received a chuckles from the BB&T  enter crowd. “It hit me in the ass.”

In interviews on the ice and in the locker room afterward,  jagr thanked the many great teammates who have helped the five-time scoring champ accumulate his #2 standing among the nearly 5,600 players who have played in the 100-year history of the NHL. He also acknowledged his parents and noted his dad  wanted him to be a great sportsman from the time he was born and appreciated their sacrfice during his childhood.

There was a game Thursday night in South Florida and Florida found itself trailing  2-0 with about six minutes left to play. During one Panthers push Jagr  positioned himself in front of the net to screen Boston goalie Tuuka Rask. Mike Matheson’s 25-foot rising slapshot changed directions in front of the net and fluttered to the bottom of the left  faceoff circle.  Aleksander Barkov blasted it into the net.

After a video review the goal was credited to Barkov with the first assist to the second leading scorer of all-time. Jaromir Jagr.

For the second time in as many games Jagr saluted the fans from the bench, even pounding his heart twice to show his gratitude to his home fans, who have cheered him robustly since #68 arrived late in the 2014-15 season.

Panthers ice-level analyst Randy Moeller was master of ceremonies for an on-ice ceremony and Panthers  captain Derek MacKenzie  presented Jagr with a gold-plated replica of his stick that was a gift from the team. Click to enlarge the individual images presented here from nhl.com.

Full highlights with stories, interviews and  additionals photos from nhl.com at this link…

That Barkov  scored the goal which produced the historic point was poetic justice. The prodigy center from Finland has stated jagr was  his boyhood hero and that he his living the dream by playing with and learning from #68. Their on-ice magic has produced many memorable plays for the Florida Panthers and citizens from both their countries can be seen wearing their jerseys and waving their countries flags when these two are on the ice in Sunrise. More highlights are expected in the next month or so as their regular left wing, Jonathon Huberdeau, has resumed skating in preparation for his return from a leg injury suffered in an exhibition game in October.

As for Thursday’s loss, an empty net goal by the Bruins sealed their 3=1  victory and was their third win over the Panthers this season, enabling them to build up a four point lead over their Atlantic Division rivals.

No time for the Panthers to lick their woulds. The Panthers play their last game before Christmas tonight vs the Detroit Red Wings which will be their last game until their next game Wednesday, Dec. 28 against the Toronto Maple Leafs at the BB&T Center. Tickets for those and all panthers games can be secured at panthers.nhl.com.

Jagrometer.com is produced by Ray Haluska who can be reached by email ROKINRAY@aol.com or on twitter @CruisingRay