BUFFALO–The Florida Panthers lost another must win game to Buffalo 4-2 Monday night as their playoff odds dwindle to 3,333:1 with seven games remaining in the 2016-17 season.  Jonathon Marchessault continues his hot steak with his sixth goal over the last three games. Some wonder if one week of good games means he should replace the legend Jaromir Jagr on the Panthers top line with Aleksander Barkov and Jonathon Huberdeau.

Jagrometer.com doesn’t think so, but we don’t make the lineups, negotiate the contracts and Jagr himself doesn’t contact us for advice on his career.

Not a great article, nor a great translation, but they suggest it’s 35% chance he plays on an NHL team other than Florida, 30% chance it’s Florida,  and the remaining percentages divided among Kladno, the KHL or possiibly another Czech league team.

With  1704 career games played and a chance to pass Gordie Howe’s NHL record of 1767 career games, we think it’s all cut certain Jagr returns to the NHL next year. With 1909 points and a stated pledge to go until 50, or even 55, reaching 2,000 points seems to be another motivator  and while his days of carrying a team are behind him, he can still expect to be a major contibutor at the NHL level and in the right setting could reach that mark in two seasons.

Not sure if there is a Czech reporter at games or if this was merely compiled by a few writers chatting it up at a pub in Prague, but here’s what the Jagr-crazy Czechs were treated to in their morning paper today, awkward translations and all. (Your browser may give you a translation option because I doubt you can learn Czech before the afternoon is up).

Another recent article from Denik Sport goes on a lot of tangents but suggests that if he doesn’t have a deal by the end of the season, his  best option may be to  test the market, which he isn’t afraid to do. Depending on how you the article in translated, he may have told teammates the team has told him they aren’t offering him a contract, as one friend interpreted it, or he’s not sure if the team will offer him a deal.  Like all NHL players, Jagr has an agent to handle these matteres and one day in the next month we may hear if Jagr’s time with the Panthers will continue.  His representation has served him well since he returned from the KHL, getting him good salaries in every seasons, enabling him to continue in favorable settings without testing the market after other seasons.

Last year Jagr was the team MVP and scoring leader for Florida.  He, like many Panthers has suffered a drop in scoring this season. Jagr is still producing points at a clip that would put him in in the top five on almost all teams, is +12 on a team that is -18 in goal differential and still doing well by most standards of measure other than shooting percentage.  The work ethic is there. As the goals haven’t gone in this season, he’s bone back to playmaking, a bit of a lost art in the current NHL.  Two charley horses in October hindered early season production but haven’t kept Jagr  out of any games this season, where younger teammates have missed dozens of games.

Stats and highlights of the Panthers loss to Buffalo from nhl.com

Pay special mind to the great hustle by Jagr that resulted in Huberdeau’s goal. More plays like that by the rest of the Panthers this season would have produced about 20 more wins.

Still considering a plea to the NHL to review the Huberdeau goal for a super slow mo review to see if Jagr’s hustle resulted in the slightest bit of contact with the puck that would have resulted in an assist in the Buffalo game. As it is, we’ve done an audit and made a few tweaks to correct a few errors and our chart is up to date and correct to the best of our knowledge. 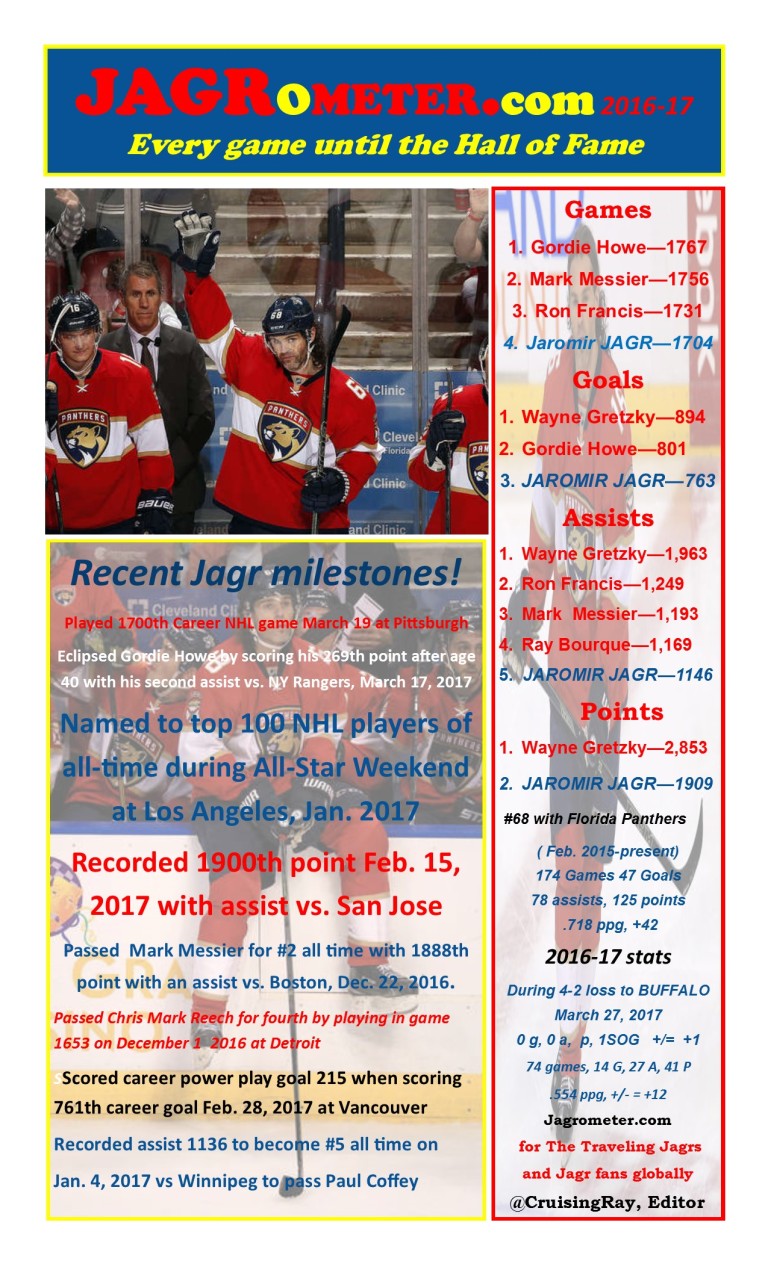 The young Maple Leafs get their final look of the season at Jagr who in the past has drawn the admiration of Toronto coach Mike Babcock. Better hide those sticks!  Three more games on the road this week for the Panthers as….THE LEGEND CONTINUES! 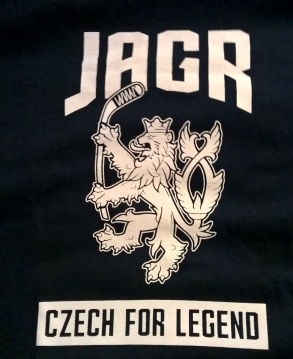 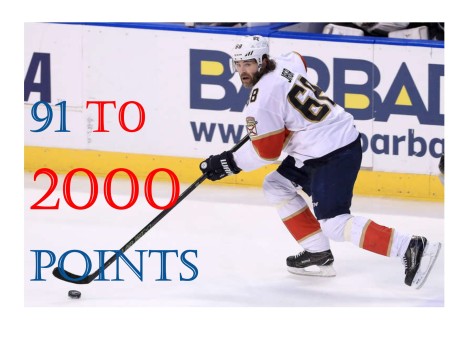