(CALGARY) —  Calgary overcame a one-goal deficit to take a 2-1, but then fizzled down the stretch as the visiting Minnesota Wild claimed a 4-2 victory at the Saddledome. The team not only lost the game, but the services of  right wing Jaromir Jagr and  for a time, defenseman Michael Stone.  Jagr was placed on injured reserve by the Flames and will miss at least three games since the earliest he can return is Oct. 29 when Calgary hosts Washington, but it’s too early to know if he will be ready to play then.  TheScore.com had a brief release on Jagr’s IR placement Sunday.

Jagr has been one of the NHL’s most durable players in recent years, with two perfect slates in the last four seasons and only 11 games since the 2012-13 season (excluding the first three games of this season which he used to train with the Flames after signing with them the day before the season started. Last year Jagr played all 82 games for Florida, and only left one game early but returned to action the next game. Jagr also played through groin injuries in the early part of the season, and one time nursing those tender muscles in both legs. During the 2015-16 season, Jagr played in 79 of 82 games for Florida and led the team with 66 points. Until we hear the report from the team today, it won’t be foolish to think Jagr could be ready to go for the Flames next game Tuesday at Nashville.

Recap and stats  of Saturday’s loss to Minnesota courtesy of nhl.com.

Jagr left the game with a little less than six minutes remaining in the first period. The Czech right wing had one shot on goal in 3:49 of ice time including 3:00 of power play time as the Wild drew some early penalties. Jagr was looking stronger than previous games and after charging toward the net his stick was broke and he skated off the ice and down the runway to the lockerroom.

Jagr wasn’t around long enough to impact the scoresheet, but he did play in his 1716th NHL game. The NHL also noted that counting playoffs, Jagr tied Gordie Howe in total games played with 1724. This category will be tracked on the Jagr-O-Meter. 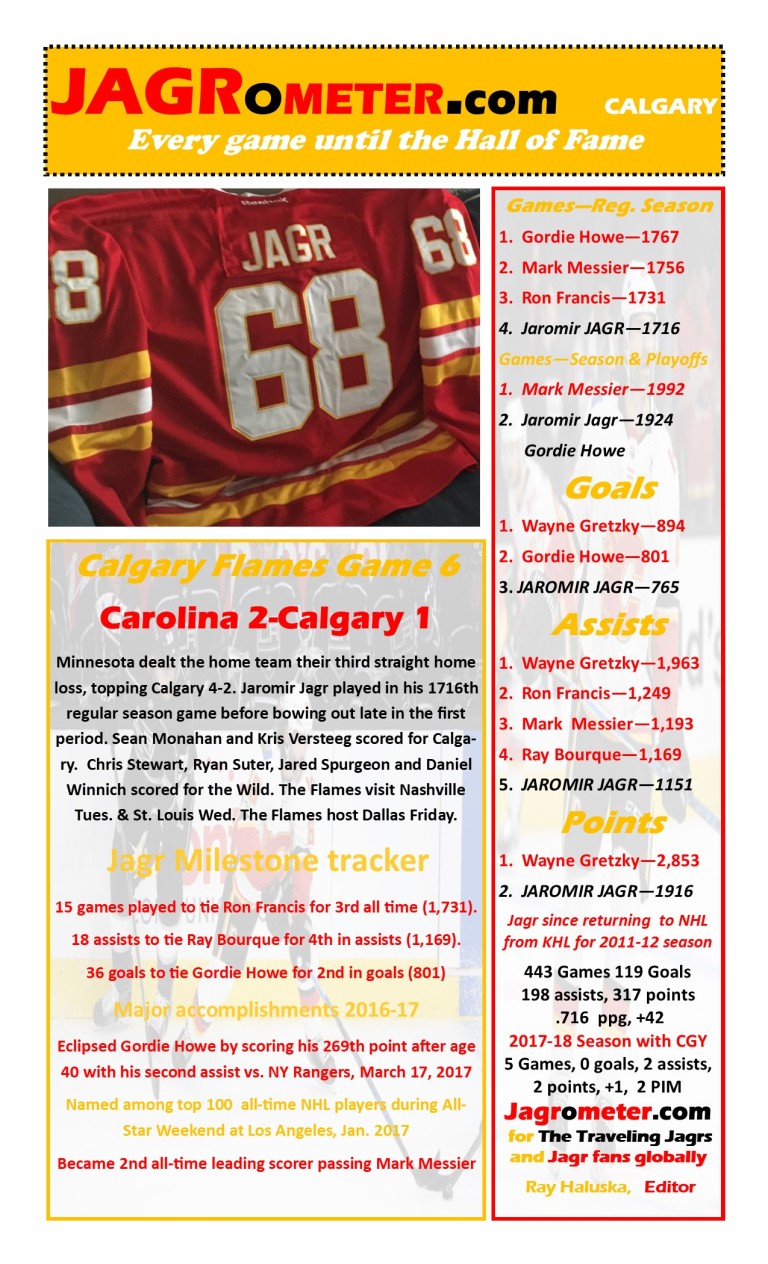 After the game Jagr was interviewed on Sportsnet’s “After Hours” program. The Canadian sports outlet shared the rare long-form interview afterward. This is one of the more revealing sessions Jagr has held.

The startup on-line sports website The Athletic released a long article on Jagr this week. It’s a pay site but they’ve told us you get all teams, all sports and are not limited to a local market. For the price of a magazine you can be bombarded with more content than you have time to read. Here’s the link to their Jagr article, with a few preview paragraphs before you have to sign enroll.