Sean Monahan scored a natural hat trick, all on the power play in the second period and added an assist, while Johnny Gaudreau, from nearby South New Jersey, had a goal and an assist as well as the respect of the Flyer faithful who appreciated the efforts of a local boy done good.

It was a quiet day for Jaromir Jagr and his linemates, outside a few shifts in the third period, when with the game on the line were generating pressure if not scoring chances. He finished -1 on the day, and also cut short a few shifts, raising concerns here he might be feeling some effects of the lower body malady that kept him out of six games not so long ago.

Expanded coverage and stats from nhl.com at this link.

It’s  not the Chattaonooga Choo Choo, but team takes train to DC

After the games the Flames boarded trains wearing 40s/50s era suits in a themed excursion to Washington. Still looking for a solo photo of Jagr in the outfits, but here’s how the bulk of the team looked in those classic threads. Jagr may be in the back row of this picture, his famous hair blocked by the hats of his teammates. 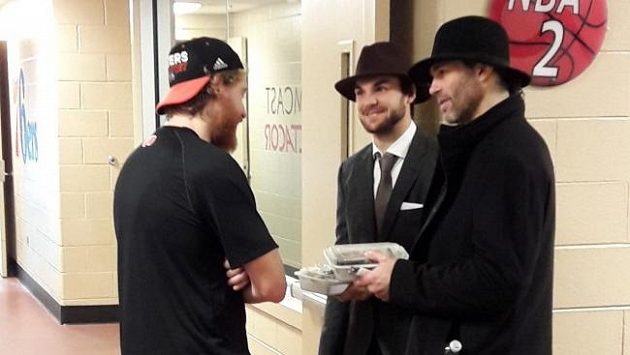 That photo is from sport.cz and here’s the accompanying text which translates in google chrome.

That’s the way people dressed decades ago. Look at game film from the early 90s, even. Game jerseys were rare. Now they are abundant.

and also this article about a ritual in Philadelphia where Czech players from both teams meet after a game.

The Washington Post published this article we’re happy to share a link to from their Sunday edition.

The Flames play the Capitals at 7 pm EST,  Monday, Nov. 20 in Washington. Jagr fans invited to meet and mingle at Fuel, across the street from the arena to enjoy pizza and wings before the game or at The Green Turtle Bar in the Capital One Center after the game. Usually a strong of Czech and US born Jagr fans show up for games in Washington. Jagrometer.com will be there again and expects to see more than the 10 Jagr jerseys observed in Philadelphia.

Doing research for this page always unveils something interesting and unexpected links unrelated to the original thought. We’ve mentioned Czech writer Zdenek Janda frequently. Three years ago East Coast writer Randy Miller wrote about him for nj.com. An interesting look at someone who has unique access to the Legend.

Zdenek wrote about an Jagr feature in Czechs Sport Magazine, which also published the Jagr in 50’s era clothes we shared.

sport.cz is an on-line magazine that routinely shares Jagr news