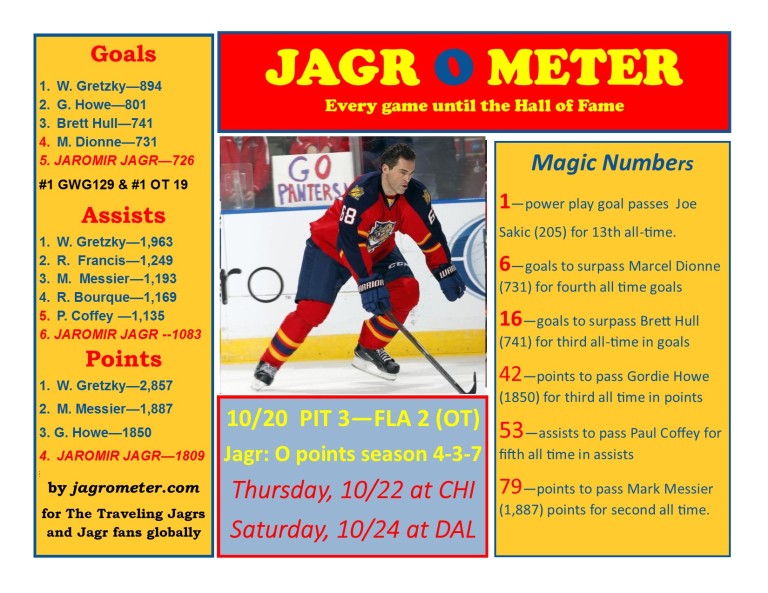 (PITTSBURGH) — Evgeny Malkin scored an overtime power play goal as the Penguins beat the Panthers 3-2 Tuesday night at Consol Energy Center.  Sidney Crosby picked this game to end his season-long scoring drought with a three-point night, recording an assist on the play, which came about with the Penguins moving the puck around the perimeter while the Panthers were in a triangle defense waiting for a chance to pounce.  (As a side note, the winning goal featured 4-on-3 play which is how carryover penalties from regulation are handled in the new 3-on-3 era of overtime.  NHL rules have long dictated a team have a minimum of three players in front of the goalie).  But this was 87’s night. Crosby also assisted on Phil Kessel’s goal early in the third period and had the opening tally of the game with a power play goal in the first period. With nine shots on goal Crosby played inspired hockey for three periods.

After trailing 2-0 mid-way through the third the Panthers forged a tie on goals by Quintin Howden and Derek MacKenzie at 11:04 and 13:57. Howden had an assist, and Conner Brickley had two assists for the game as the fourth line roared for the Panthers.

From the stands I monitored the anguish of Panthers fans over the officiating via twitter, especially when, after a lengthy review,  an apparent goal by Reilly Smith was waved off  early in the third due to a ruling of playing the puck with a high stick. Later, the Penguins faithful were enraged when a video review negated their apparent third goal. Some of them will still complain about that call though they ultimately won the game.

When it’s late in a a tied game the Jagr-O-Meter hopes fate will trigger an increase in Jagr’s goal and point totals as well as his NHL record 129 game winners and 19 overtime tallies.  Not on this Tuesday night In Pittsburgh.

The Penguins received a power play when a highsticking penalty was assessed to Jonathon Huberdeau in the final minute of regulation with the Panthers top line applying pressure.  In open ice that call might not be made, but that contact with  blindsided player against the boards is a call  you have to grudgingly accept in the name of player safety. Had the situation been reversed, Florida fans would have celebrated the call. The Panthers now 3-2-1 (wins-losses-overtime losses) play in Chicago Thursday night and Dallas Saturday night.  The Penguins third win in a row evened their record at 3-3-0. The Panthers and Penguins meet twice in February at BB&T Center.

Its always big news when Jaromir Jagr comes to Pittsburgh.  The legend won  5 scoring titles there,  and two Stanley Cups as part of a long resume of accomplishment there. Jagr is credited for returning from a groin injury early to lead the Penguins to victory in games 6 and 7 of a playoff series against the Devils in the 1999 playoffs. Facing financial problems the team would have been forced into bankruptcy and possibly moved without the playoff revenue from games in the next round. This point was noted by several grateful members of the Pittsburgh media most notably by Mark Madden of WXDX:

https://twitter.com/i/cards/tfw/v1/656568581103091712?cardname=summary&earned=true&lang=en#xdm_e=https%3A%2F%2Ftwitter.com&xdm_c=default8917&xdm_p=1
It was refreshing that Penguins fans were for the most part quiet this game in regards to Jagr. Some never forgave him for being too valuable for the once financially-strapped franchise, forcing a trade to Washington. Since then games in Pittsburgh often featured incessant booing which got even worse when upon returning from the KHL. Jagr, or more precisely, his agent, wisely rejected the Penguins lowball offer of $2.1 million when he returned from the Russia and instead signed with the rival Flyers for $3.1 million. It’s like hating the kid at the drivethrough at McDonalds for taking a job at Burger King for more money. But that’s sports fan logic, warped as passion can make it at times. Maybe things are changing for the better. For years Pittsburgh fans have looked stupid while the rest of hockey has been celebrating Jagr’s stature as a living legend of the game.
Had an informal chat with the legend  through a chance meeting on the street, which I’ll detail later.