SUNRISE–An overtime goal by Evgeny Kuznetsov gave Washington a 2-1 victory over Florida Saturday night as the Panthers ended a three game homestand 1-1-1. Jussi Jokinen scored the Florida goal while the Capitals tied the game on a gola by Jay Beagle that survived a long review brought up by a coaches challenge.  While he didn’t score Capitals sniper Alexander Ovechkin collected assists on both goals.

Jaromir Jagr (groin) and Aleksander Barkov (hand) did not play and their absence has shown in the last two games where the Panthers have only scored one goal in each contest. The Panthers hope Jagr can return to action as they travel for the West Coast swing: 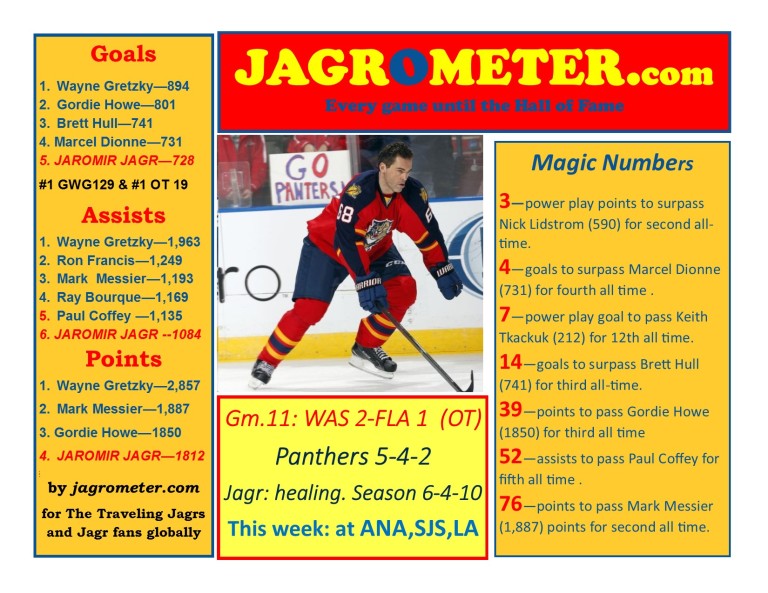 Have to send a shoutout to the three guys from the Czech Republic who hoped to see their national hero in action for three games. They were ready for a crowd shot if Jagr had played and scored:

For them and anyone else that misses Jagr scoring goals, a nice video I found on youtube:

@TravelingJagrs The Traveling Jagrs, clad in different Jagr jerseys and hair styles from 68’s career, they gained league-wide recognition when they caught Jagr’s attention during a pre-game skate of a Dallas Stars game in Canada during the 2012-2013 season. Since then, they convene at games in Western Canada and make a road trip or two every year, playing street hockey with locals, posing for hundreds of pictures, and having a good time with local fans while honoring an all-time NHL legend. Follow them on twitter: