TAMPA BAY–Veteran goalie Roberto Luongo got stronger as the evening got longer as the Florida Panthers (7-7-3-17) defeated the Tampa Bay Lightning (8-8-3-19) Saturday night 5-4 in game decided by a shootout goal by Florida’s Brandon Pirri at Amelie Arena in Tampa.  In the second period Pirri used similar skills to  score on a penalty shot after being pulled down on a breakaway.

After struggles in first half of the game resulted in two goals for the Lightning, Luongo stopped Lightning star Steven Stamkos on a penalty shot in overtime. Proving that play was no fluke he stopped  Lightning attempts in the shootout by Victor Hedman, Brian Boyle and finally Valtteri Filppula to secure the victory for Florida.

Other Florida goals were also thrilling, like Nick Bjugsted’s breakaway in the second period, and timely, as Aaron Eckblad’s point shot found it way behind Lightning goalie Ben Bishop with 0:38 remaining in regulation and the Panthers on a power play with Luongo pulled to force the overtime. Early in the game Jussi Jokinen scored for the Panthers in the start of a rare “no lead is safe” game that saw three lead changes. Scoring for the Lightning were Vladislav Namestnikov who scored two and almost had a hat trick, as well as Cedric Paquette and Anton Stralman. Stamkos had two assists for Tampa Bay.

Highlights and a statistical summary of the game from nhl.com can be viewed here:

Jaromir Jagr milestone: Jagr played in his 1565th NHL regular season game, breaking a tie with Niklas Lidstrom for  10th all time. If Jagr stays healthy he could catch #9 Ray Bourque (1612) and #8 Larry Murphy (1615) this season. No points for Jagr in this game, which produced a rare win for Florida when he is held scoreless.

Seats for these and future Panthers home games available at http://www.floridapanthers.com.

Before the game Jagr showed his support for the victims of the terrorists bombs and shootings in Paris with a twitter post. 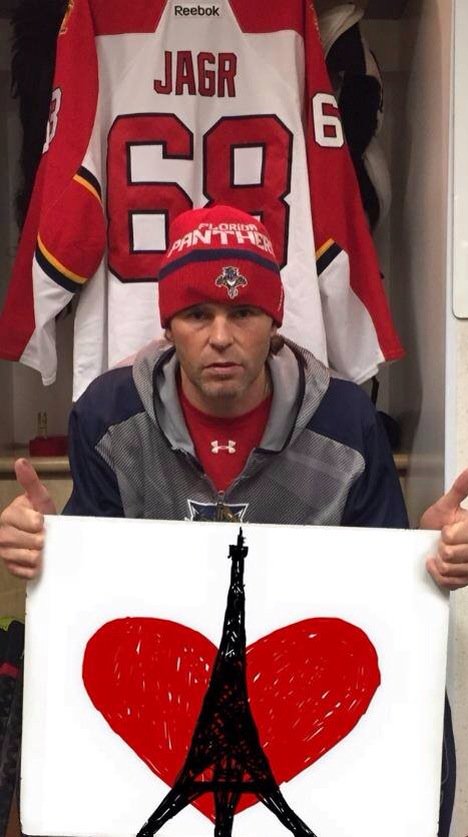 1,505 retweets2,723 likes
Reply
Retweeted
1.5K
Liked
2.7K
I hope the world can become a happier place some day. We all have blessings to be thankful for, life being the biggest of all.
That’s all for today. Feel free to subscribe to jagrometer.com by finding the button and entering your email. Thank you.