SUNRISE, FL—Tampa Bay (8-8-3-19) visits the BB&T Center tonight, two days  after Florida’s (7-7-3-17) thrilling 5-4 shootout victory at Amelie Arena. Tonight’s game is the first of five straight at home for Florida. There’s good news on the injury front as Aleksander Barkov has been skating in practice since Thursday and is expected to play this evening, the Miami Herald reported Sunday.

When  Barkov was injured Oct. 22 against Chicago, Jaromir Jagr said the injury cost the Panthers their best player. Quite a compliment for the 20-year old center but the results don’t lie. Florida was 4-4-2 in 10 full games without Barkov who is projected back at center between Jonathon Huberdeau and Jaromir Jagr. The lack of Barkov and missing two games to  injury  limited Jagr’s scoring to two goals and three assists, well below the point a game pace he enjoys while playing with Barkov. 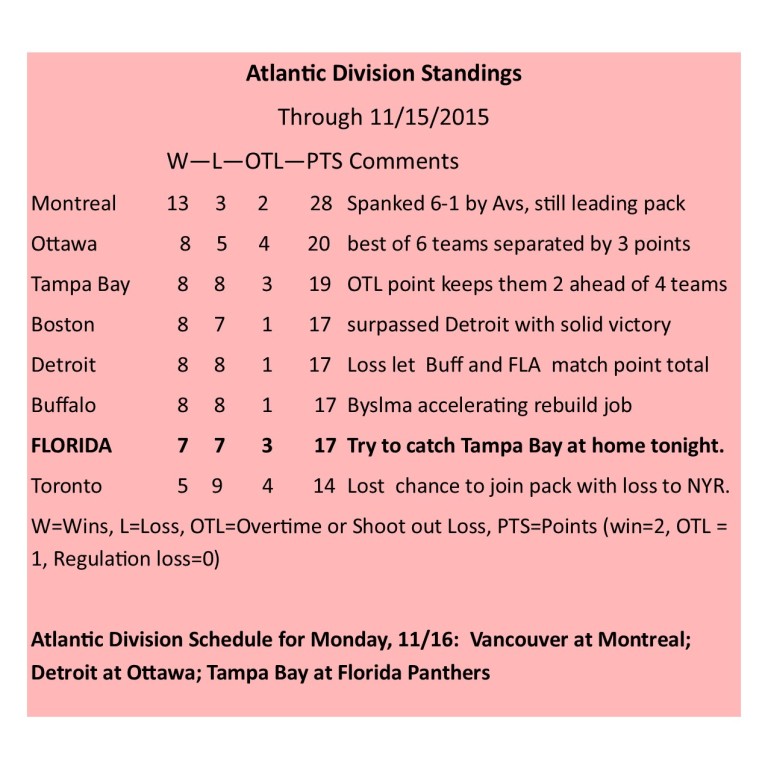 Top scorers  entering the game for Florida tonight include: Jagr and Vincent Trocheck at 7 goals, six assists for 13 points, each. Next are Nick Bjugstad, 6-5-11, Reilly Smith 5-5-10 and Jonathon Huberdeau 1-8-9.

Later in the week the Panthers host Anaheim Thursday and the New York Rangers Saturday night.

Tickets for these and other games available through http://www.floridapanthers.com.