SUNRISE–With a 2-1-0 record through three games of a five game homestand, the Panthers try to rebound from Thursday’s loss to one of the NHL’s underachieving teams in Anaheim and get back on the winning track against the New York Rangers. Prior to leaving for the KHL,  Jaromir Jagr spent a few years in NYC and during 2005-06 set season records for goals (54) and points (123), seeing the scoring championship slip away to San Jose’s Joe Thornton in the last week of that campaign.

A game against a former team frequently brings out an inspired performance and perhaps Jagr will have one of those memorable games in tonight’s game at the BB&T Center. In a late-season game at Madison Square Garden the Panthers dropped a close game to the Rangers despite outshooting New York 39-34. It’s been a while since the Panthers have outshot anybody. Tonight would be a good time to change that.

Hair hair: Something that is ever changing, perhaps even microscopically, is the growth, or regrowth of #JagrsMullet (as it can be researched on twitter). Under the FanZone section there’s even a link to it at the team website: http://www.floridapanthers.com.

The good news is, this is about 1″ of growth since the last update Nov. 1, 2015, but far  from the magnificence shown in these hockey cards from  his Penguins days:

BACK TO BUSINESS: The latest Jagr-O-Meter. 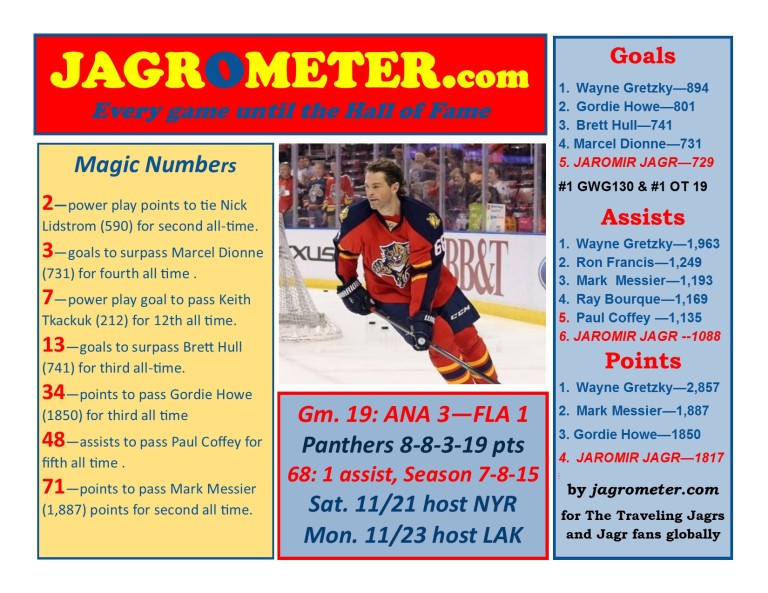 Tickets for tonight’s and all Panther’s games are available at http://www.floridapanthers.com.  The team is offering some great packages for the end of year shopping season. Treat yourself or some friends and enjoy your hockey weekend!