NASHVILLE–Goals by Quinten Howden and Jonathon Huberdeau were enough for the Florida Panthers to snag a 2-1 victory over the Nashville Predators. Florida goalie Roberto Luongo saved 32 of 33 shots to raise his record to 10-8-3. The Panthers 12-9-4 play at Columbus Friday night.

Roman Josi scored for Nashville off a long deflection, and Pekka Rinne saved 14 of 16 shots but had a lot of help from his team who blocked many attempts by the Panthers.

Highlights of the game from NHL.com can be viewed here:

Following Friday night’s game at Columbus, the Panthers finish their five-game road trip Sunday in New Jersey. Their first home game in December will be Tuesday vs. Ottawa at BB&T Center. It will be the first of two visits by the Senators to Fort Lauderdale this month. Six of the Panthers  last 10 games this month will be at home.  Other teams visiting South Florida this month include Washington, Vancouver, Columbus and Montreal  and the Panthers have some great gift and ticket packages available at http://www.floridapanthers.com.

Jaromir Jagr was held without a point for the third straight game, his longest drought since joining the Panthers. Heading into the weekend he sits at 730 goals, one shy of tying Marcel Dionne for fourth all time. For the season Jagr still leads the Panthers in scoring with 8 goals and 10 assists for 18 points. He is one of 10 Panthers with 10 or more points through 25 games. Jagr missed two of those games to injury and has played others at less than 100%.

NHL.com reported that entering Thursday’s game Jagr is outscoring 88% of the league’s forwards this season:

(EDITOR’S NOTE: DUE A CUT AND PASTE ERROR , The story intended to share here will be published tomorrow).

The latest Atlantic Division Standings. While fifth in the division Florida’s 28 points are tied with Boston and Metro division New Jersey. Tie breakers favor the Bruins and Devils at this point for the second wild card spot, which won’t be finalized until April.

Reaves on facing Jagr: “Those 43-year-old legs seem to be doing well. I’m going to try and get these 28s going.” #stlblues #FLAvsSTL

Also from Twitter, an excerpt from the excellent article in Canada’s Sportsnet magazine:

Jaromir Jagr on retirement. This guy is a beauty 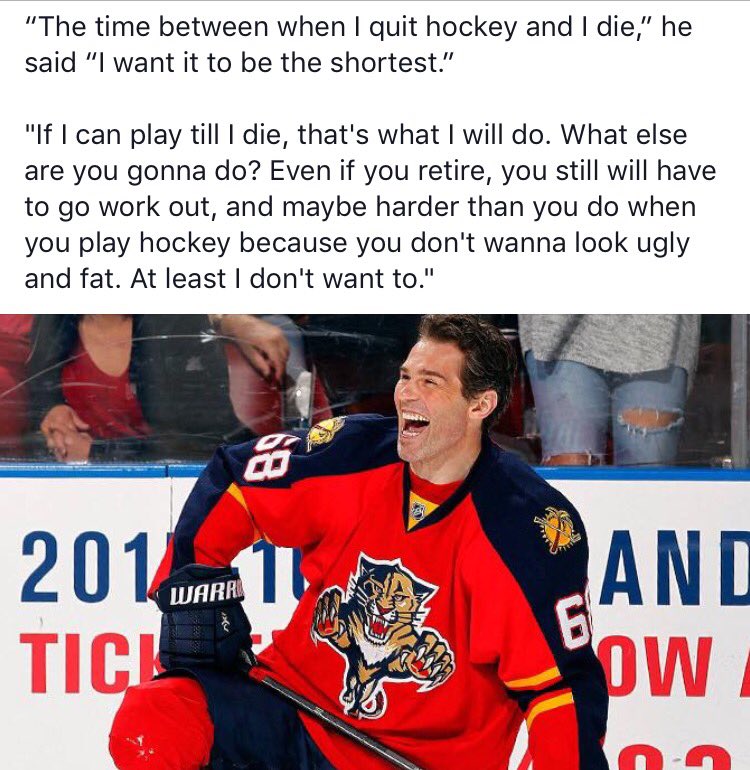 Getting the article isn’t easy, but I finally managed to download it onto my Windows phone. This link from author Kristen Rutherford gives an overview of her lengthy article.
http://www.sportsnet.ca/hockey/nhl/the-enduring-jaromir-jagr-an-oral-history/
No word from Sportsnet on if we can get some copies shipped to the USA for at cost distribution to readers of Jagrometer.com

Tweet your new stories, photos, artwork and songs to @Cruising Ray or email me at ROKINRAY@aol.com