NEWARK–The Florida racked up their second straight 5-1 victory in the New York City metro area, beating the New Jersey Devils Thursday night, two days after beating the New York Islanders by the same score. With the win by the Panthers both teams are now 16-12-4-36 with New Jersey ranked higher in the wild card standings due to 14 regulation wins to Florida’s 13.

First period goals by Jussi Jokinen and Dimitry Kulikov started things right for Florida, who added a second period goal by Brandon Pirri and final stanza scores  by Reilly Smith and an empty netter by Logan Shaw. Things were  pretty for Panthers goalie Al Montoya, who raised his record to 5-1-0 in turning aside 15 of 16 shots. The Devils lone goal was a power play goal scored by Sergey Kalinin.

What a tremendous shift by Huberdeau-Barkov-Jagr. Jagr was simply dominant. Leads to Kulikov goal. Jagr was close to score No. 732.

Watching guys try to take the puck away from Jagr legitimately looks like a big brother bullying his little brother, playing keep away.

Thursday’s excellence was spread throughout the lineup. Jokinen added an assist for a two point night, and took over the Panthers team scoring lead with 23 points comprised of seven goals and 17 assists. Jaromir Jagr added an assist on the Kulikov goal for his 22nd point of the season in 29 games played. Check out the replay, a wonderful assist by the legend.  Reilly Smith’s goal was his 10th of the season, as he passed Jagr for the team lead in goals.

Highlights of the game from nhl.com are presented here:

It’s a wonderful mix of old and young players on the Panthers and the New York Times took note of this following the Panthers win over the Devils.

Thursday was a busy night for the Atlantic Division and several more games involving its teams play Friday night. 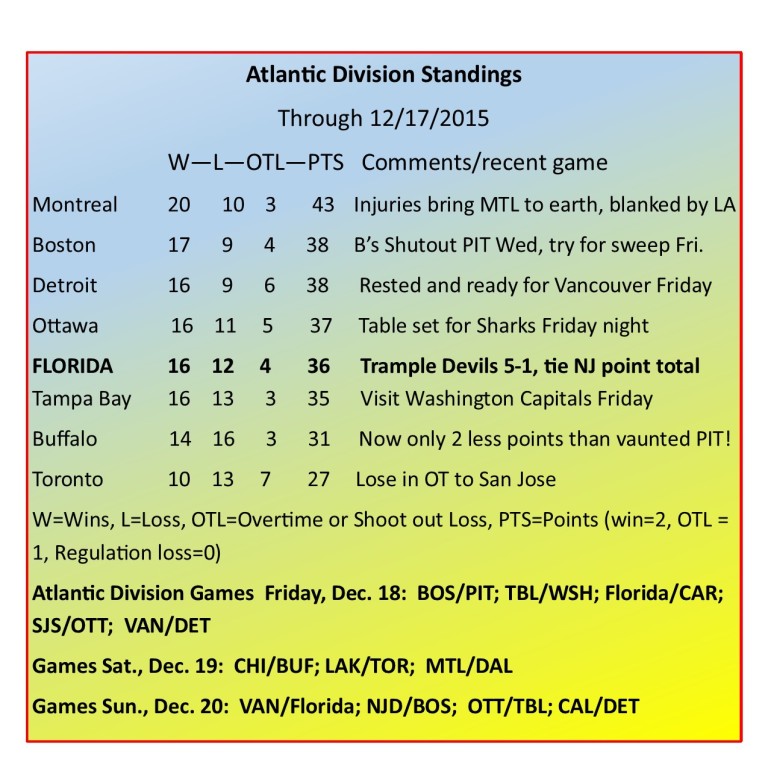 #CHASINGGORDIE1850 Jagr’s assist was his 22rd point of the season and  1,093rd assist of his career, which with 731 gives him a career point total of  1824. Gordie Howe is the NHL’s third all-time leading scorer.

The Panthers have one for the road tonight in Carolina before having a six-pack of home games to get them through the holidays.  Vancouver visits BB&T Sunday afternoon, then Ottawa comes to South Florida Tuesday for the Panthers final game before Christmas. Tickets for all Panthers home games are available at http://www.floridapanthers.com. Procrastinating Christmas shoppers can treat themselves and some friends to some exciting Panthers hockey with a gift package or design their own ticket package.

The Panthers try for their ninth win in 12 games Friday night at Carolina.