Before we get into today’s pre-game, the comprehensive SPORTSNET article on Jaromir Jagr as told by Jagr and friends dating back to childhood can be accessed for no charge at this link:

(A permanent link to the article will appear in the “assorted Jagr-related links” section shared every day here after the daily news from jagrometer.com).

SUNRISE, FL: A six game homestand which will last through the New Year’s weekend starts today with a 4 pm start (EST) in their game with the Vancouver Canucks at the BB&T Center.

It will be a frenzied couple of days before Christmas for the (17-12-4-38) Panthers. Following today’s games they host their division rival Ottawa Senators Tuesday night at BB&T.

After the dust was settled on a busy Saturday night, the idle Panthers remain in the eighth overall position in the NHL’s Eastern Conference. 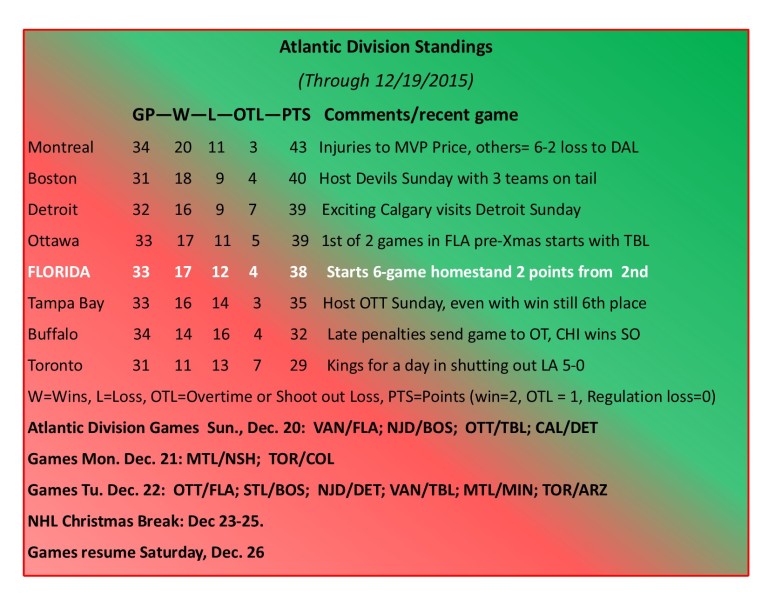 Of course, the Jagr-O-Meter hopes continued success by the Panthers provides a chance for a few milestone celebrations at the BB&T Center.

The rest of the Panthers homestand includes:

Tickets for all Panthers home games are available at http://www.floridapanthers.com . The games with Montreal and the Rangers, in particular, are in high demand and may end up being sellouts. The Florida Panthers offer outstanding holiday and ticket packages, perfect for the last-minute shopper.