For Jaromir Jagr, some of the break will be used to address the four broken teeth he suffered when he was clipped by Alex Chiasson in the mouth in the first period. The two were teammates in Dallas, and even though his mouth was bleeding Jagr gave Chiasson a pat on the back before heading to the lockerroom.

It only adds to Jagr’s legendary status that he returned to the game, assisted on the Panthers only goal in regulation, then nearly won the game on a breakaway with three seconds remaining in over time. It has been common to suggest that Jagr has lost  speed, but put a puck on his stick and an open lane to the goalie and Jagr finds an afterburner he saves for such an occasion.

Jagr has had some bursts of speed against Ottawa before. Last season he scored a wraparound goal on a two-on-one break.

Here’s the before and afters of the unpenalized  incident that is going to produce a nice payday for a South Florida dentist. Jagr was smiling pretty after scoring his 732nd career goal in Florida’s 5-4 over Vancouver Sunday.

After the game Tuesday shared this updated profile photo. Looks more like Halloween or Fangsgiving than Christmas: 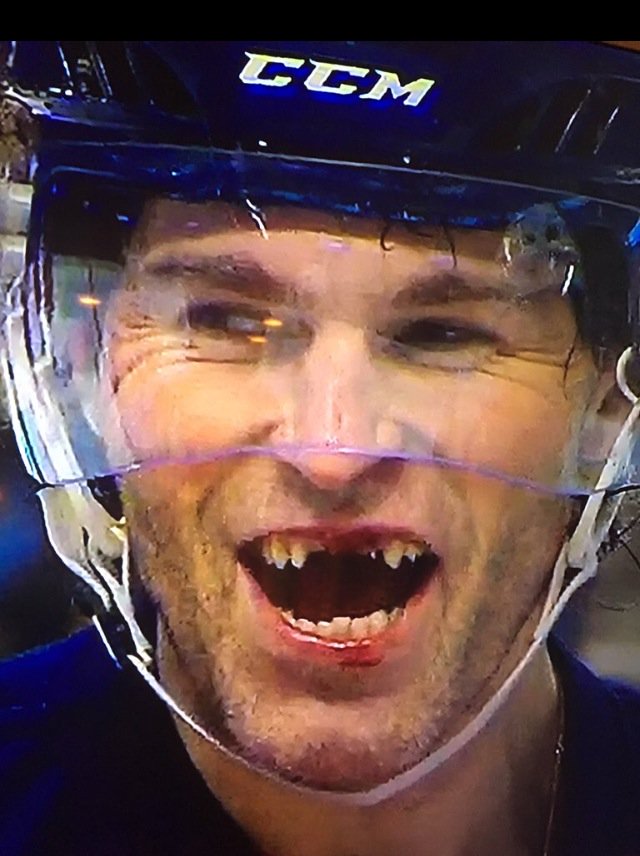 Dear Santa, can I get a new teeth for Christmas 🙂 it’s going to be tough to eat-good -at least I don’t get fat :)))

Lots of comments on this on Jagr’s personal facebook page. I always get a kick out of the translations.

If you have to see the video, yahoo sports shared it in their report on the incident.

The Panthers goal was scored by Corbin Knight, his first of the season. With Florida in a line change gathered the puck at center ice crossed the blue line. Before heading to the bench he pushed the puck to Quinton Howden, who sent Knight in for the score.

Florida outshot Ottawa 40-16, as Craig Anderson stopped nearly all the Panthers shots to force overtime. The Senators goal came early in the third period when Mark Stone tied the game off a deflection of Erik Karlsoson point shot with Ottawa on the powerplay. Roberto Luongo stopped two Senators in the shootout, before Aleksander Barkov clinched the game with his fourth straight shootout goal, and each of his four attempts has been a game clincher. You can see Barkov’s goal and other highlights from NHL.com:

#CHASINGGORDIE1850 The assist by Jagr was his 15th of the season and 1095th of his career giving 25 points and 1827 career points as he whittles his way to Gordie Howe’s third all-time best total of 1850.

A more detailed look at the game can be found in Harvey Fialkov’s article in the Sun Sentinel.

The Panthers continue their six-game homestand which will carry them into 2016 on home ice with games Dec. 27 with Columbus, Dec. 29 (Montreal), Jan. 2 (New York Rangers) and Jan. 3 (Minnesota). Tickets for these and all Panthers home games available at http://www.floridapanthers.com.

Jagrometer.com will continue to post during the Christmas break.