OTTAWA–The Florida Panthers defeated the Ottawa Senators 3-2 Thursday night to win their 11th straight game and reestablish a 5-point lead over second place Montreal and Detroit, who matches the Canadiens total of 49 points in the Atlantic Division of the NHL.

Aleksander Barkov’s third period goal provided the margin of victory with assists to Jaromir Jagr and Jonathon Huberdeau. Reilly Smith and Vincent Trocheck scored eight seconds apart in the first period to stake Florida to a 2-0 lead. Roberto Luongo made 30 saves in collecting his ninth straight win in net.

Highlights and boxscore from NHL.com can be seen here:

#ChasingGordie1850 #1100Assists Jagr’s assist on Barkov’s goal was his 30th point of the season and he is now 18 points from tying Gordie Howe as the NHL’s third all-time leading scorer with 1850 points. Jagr also has set up 1096 teammates over the span of his career, putting him within four of 1,100 assists.

Most impressive of the wins by the Panthers was their 4-1 victory over Washington, a team that has only lost 7 games all season.  A few weeks ago the Panthers were battling Ottawa for a wild card slot and now are well ahead of them. The Panthers reached the half-way point of the season with 54 points, if maintained, projects to a 108-point season.

http://www.theglobeandmail.com/sports/hockey/led-by-43-year-old-jaromir-jagr-florida-panthers-pounce-to-top-of-atlantic/article28044009/
A collection of the best of Jagr-related tweets including one from the legend. Some had to do with the naming of Jagr (voted by the fans) as well as teammates Aaron Ekblad (defense), Roberto Luongo (goalie) and Gerard Gallant (coach) to the roster of the Atlantic Division in this year’s special 3-on-3 All Star tournament involving teams from all four divisions. It’s not the Bahamas, but Nashville is fun. At least he’ll be going with friends. 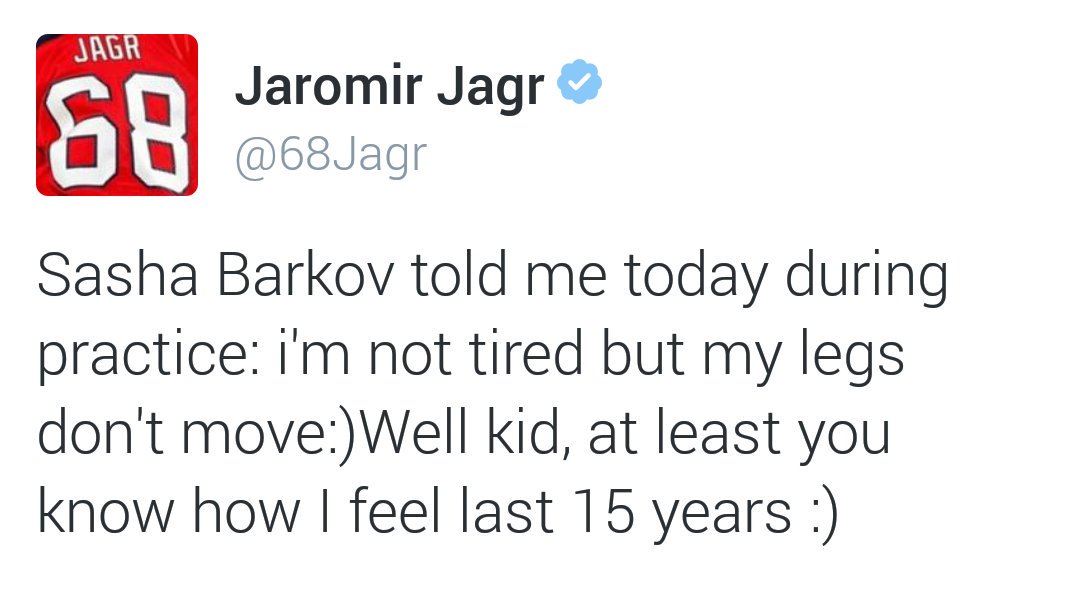 Stamkos on playing with Jagr: “That’ll be special. I might have to ask him for a signed stick.”

The Hockey News speculated on Jagr’s performance in comparison to hockey players and professional athletes from other sports in their 40s in this article they  recently posted:
http://www.thehockeynews.com/blog/is-jaromir-jagr-the-best-43-year-old-in-pro-team-sports-history/

Also, here’s a chance to brush up on your French with this account from Thursday’s game.