CALGARY–Rookie Sam Bennett scored four goals in Calgary’s 6-0 route of the Florida Panthers Wednesday night. Johnny Gaudreau and Mason Raymond also scored for the Flames, whose victory was so thorough that goalie Jonas Hiller wasn’t awarded one of the game’s three stars for his 15-save effort.

Pass after pass by the Panthers misfired, and when they chose to shoot, too often it was deflected away. Calgary had an answer for everything the Panthers tried, including a goalie switch, with Al Montoya giving up two goals over the final two periods after starter Roberto Luongo was pulled after surrendering four scores in the first stanza.

Here are the lowlights, from nhl.com:

The Panthers were without Defenseman Aaron Ekblad, who was injured Sunday in Edmonton. Coach Gerard Gallant also missed the game as he mourns the death and celebrates the life of his mother who passed away late last week.

The only good news for the Panthers on this night was the other three teams in the Atlantic Division playing Wednesday night also lost as Boston, Ottawa and Toronto were also defeated.

The shutout mean no points for Jaromir Jagr. 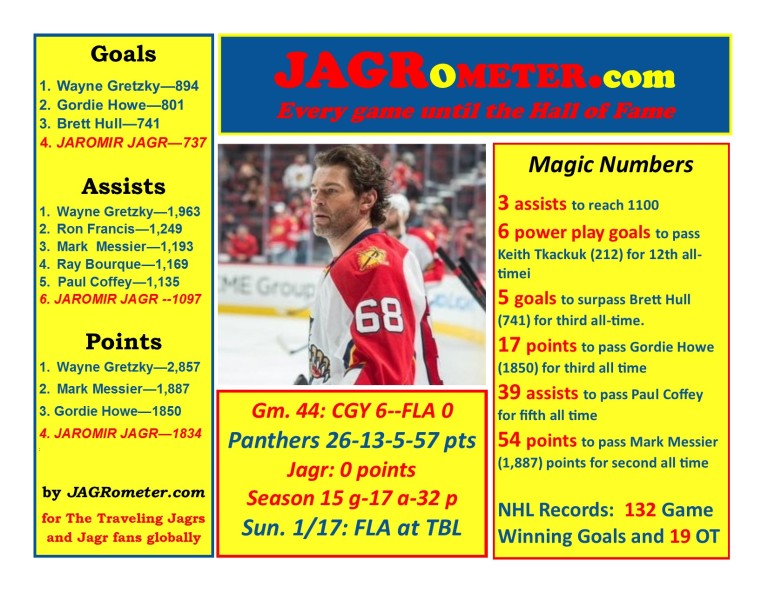 Jagr had one of the few highlights with a diving sweep in front of Montoya which likely prevented another quality scoring chance. Still looking for photos or a clip of that…almost worth watching the whole second period to see again.

Here’s a feel good story from the Calgary Sun to take away some of the sting of the loss.

Florida plays at Tampa Bay Sunday before hosting Edmonton Monday at BB&T Center. It will be the first of four games for the Panthers at home prior to the All-Star break. Tickets for those and future Panthers home games are available at panthers.nhl.com.

The game marked the third straight appearance of the Traveling Jagrs, most of whom hail from Calgary. Their origins are explained in this article, which calls them groupies, but can a group of people with their own groupies really be considered groupies?

A short video from Canada

The Traveling Jagrs will be coming to BB&T Center for Panthers games and off-ice activities March 7-12.