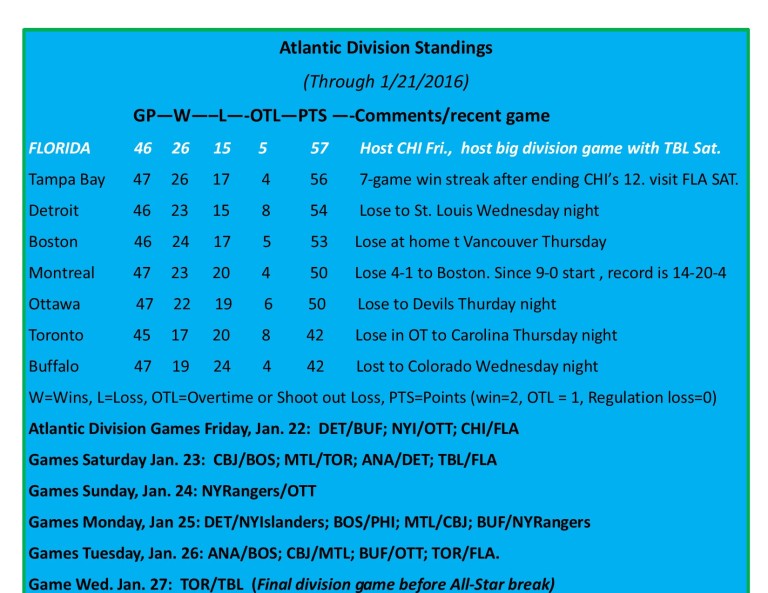 SUNRISE–The race is getting tight in the Atlantic Division of NHL. Tonight would be an opportune for the Florida Panthers to end their 0-3-1 skid. The Chicago Blackhawks visit the BB&T Center to play Florida tonight The Florida Panthers get All-Star defenseman Aaron Ekblad back in the lineup after four games missed due to a head injury suffered nearly 12 days ago when Florida was playing at Edmonton.

Ekblad’s return comes in time for the Panthers as the Blackhawks are one of the NHL’s best teams and should be out for revenge after seeing their 12-game winning streak snapped at Tampa Bay Friday night.

The Panthers are well rested since losing 4-2 Monday night to Edmonton, the last of three games in four nights.  While some players welcome the rest, All-Star right wing Jaromir Jagr insists he’d rather play every day. South Florida newspapers all printed their impressions of his rigorous workout routines. While many people have trouble finding 30 minutes a day to work out, Jagr generally spends about 4.5 hours per day doing various weight-influenced exercises to maintain and sharpen his game.

First from the Miami Herald.

The Sun Sentinel also published a piece on the topic.

Also chiming in was the Palm Beach Post. Bear with their popup and use this as one of their four free articles you can read without subscribing.

Also found it interesting that in addition to game strategy that the younger Panthers are incorporating some of Jagr’s training into their own routines.  In the early 2000s Jagr’s routines were a big secret accidently discovered by a New York reporter who honored Jagr’s request not to discuss them publicly. This Sub-titled youtube video shows Jagr demonstrating some of his drills. Subtitles may need activate at the CC sympol at the bottom of the video.

Based on feedback of the first video, he produced a second video which was a mixure of off-ice and on-ice workouts.

It’s exhausting watching this videos! But incorporating any of the drills will make you better than you are today.

With the Blackhawks in town it’s time to remember some Jagr highlights from the 1992 Stanley Cup finals. First the game tying goal from Game 1. The Pittsburgh Penguins fell behind 3-0 in that game and they were running out of time late in the third period. Witnesses to it have never forgotten it.

Three games later the Penguins were on the verge of winning their second straight cup. Near the end of a thrilling 6-5 win at legendary Chicago Stadium, Jagr and linemate Mario Lemieux played keepaway from they opponents, showing great puckhandling ability against a desperate, talented team. You’ll notice some of the things Jagr discussed in the workout videos posted above.

It’s 2016 and the Florida Panthers have a big weekend ahead of them. Chicago Friday night, Tampa Bay Saturday night. Both games at BB&T Center with seats available at panthers.nhl.com. 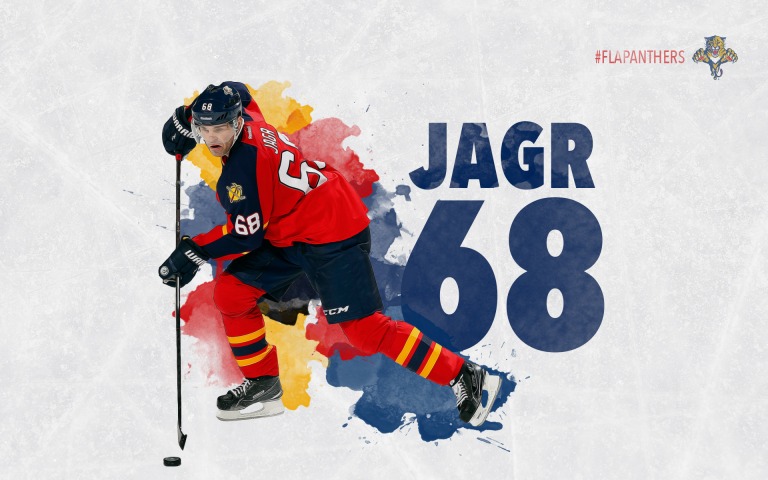