Skip to content
NASHVILLE–Another great day in the NHL at the Skills competition. On the serious side, the Eastern Conference dominated the Western Conference in the skills competition which awarded the option to choose which game to play in thequalifying round for the first ever, $1 million, winner-take-all, 3-on-3 hockey tournament which will pit all four teams in a single eliminiation tournament.
Metropolitan Captain John Tavares and Atlantic Division champion Jaromir Jagr discussed matters and the schedule will be as follows:
5 pm EST–Atlantic vs. Metropolitan
6 pm EAST–Pacific vs. Central
7 pm EST–Championship game between the winners of the first two games.
Why the first game?
Jagr: “I play first so if we lose I can go home right away and rest”.
As more than one guy said: Just never change Jaromir.

Today’s events consists of the three games listed above. Based on the success of the five-minute three-on-three overtime the NHL has used this season, the league decided to incorporate those thrills into a 20-minute game using the format. Some are concerned that 20 minutes on  three-on-three is too much and that the players will be exhausted. Others remind the players will not be playing a 60-minute game before the three-on-three session like what happens in regular season games. One of these theories will prevail today, that may be the only thing certain.

Each team has it’s strengths which we will highlight here.

Many people are impressed with the Central Division team which has three of the NHL’s leading scorers in Chicago’s Patrick Kane and Dallas Stars forwards Jamie Benn and Tyler Seguin. The Central also has four players from host Nashville on their squad which will help pump at the volume.

From the Pacific Division, Calgary’s Johnny Gaudreau is an 3-on-3 demon for the Flames and his speed could be the difference maker for his Division. Some renegade fans mounted a successful campaign for nice guy enforcer John Scott to play in the game, mostly as a joke to see how a fringe player with size could compete in a 3-on-3 game with the NHL’s elite talent. Today we’ll find out.

For the Metropolitan Division playing without Alexander Ovechkin would be considered a burden if he wasn’t replaced by his teammate Evgeny Kuznetsov, who is fourth in NHL scoring with 49 points in his second full NHL season. With proven game breakers like Evgeny Malkin of the Penguins and Capitals forward Nicklas Backstrom. They also have the option of Brandon Holtby in goal.

Defense would seem to be the strength of the Atlantic Division as the group’s top two goalies, Roberto Luongo of Florida and Ben Bishop of Tampa Bay are good choices in net. Second-year defenseman Aaron Ekblad of Florida  and PK Subban of Montreal are exceptional blueliners and thrive in any situation. Steven Stamkos of Tampa Bay and Boston’s Patrice Bergeron are dangerous wingers. Jagr may end up having less of an impact than we would like because he doesn’t get a lot of use in 3-on-3 when Florida goes into overtime. This could be a significant factor in there not being a storybood ending for the legend in this game.

JAGRometer.com avoids predictions, choosing to enjoy a game as it plays out rather than creating a chance for disappointment when preconceived notions of possible outcomes do not come to fruition.

The tributes for the living legend Jaromir Jagr continued all day Saturday and some of the best tweets, video and articles are presented for your enjoyment. After a few years of climbing past several legends on the all-time NHL scoring lists, the hockey world collectively understands Jagr may be playing in his last All-Star game (and first since 2004).
In addition to being two assists shy of 1100, four goals shy of tying Brett Hull’s mark of 741 for third all-time and 15 points shy of tying Gordie Howe for third all-time, Jagr plays top-line minutes with the first place Florida Panthers, a long-struggling team that has played at a 105-point pace since his arrival at the trade deadline last season as Jagr is second on the team in goals (15-trailing Reilly Smith’s 16) and points (33-trailing Jonathon Huberdeau’s 34). Jagr lead in both categories until last when as a recent skid has enabled the younger teammates to surpass his output. For first-time visitors, we recap every game Jagr plays and present the Jagr-O-Meter to show his standings on the all-time scoring lists.
First from a fan:
cah see ‏@thehazelbelle 33m33 minutes ago

Jagr = the NHL Cool Dad who has the best cars, best jokes, and best flow. 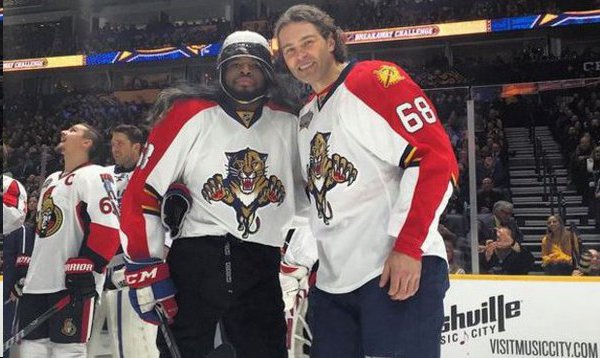 Jagr found some time to pose with PK Subban and also talked about the Traveling Jagrs team picture on his facebook page. Reading all the comments, many from the Czech Republic would take hours.

“I called my mother and said I didn’t know I had a brother”. Jaromir Jagr on Pk Subban

“For me, it’s a huge honor for that five minutes I was Jaromir Jagr. It’s pretty cool.” – P.K. Subban

Harvey had that comment and a lot more in his article discussing Subban as Jagr:

PK talked about his winning effort in this video shared by the Canadiens:

ESPN talks about Saturday in Nashville…
http://espn.go.com/nhl/story/_/id/14682207/nhl-best-worst-all-star-game-skills-competition
Another silly moment from Saturday’s proceedings:
http://hockeyandbandobsessed.tumblr.com/post/138384357310/sheercompulsion-asg-skills-2016-tyler-seguin
For our many readers in the Czech Republic, Jagr’s hair and his campaign to regrow his mullet this season for the first time since the late 90’s has been a obsession of sorts with hockey fans in the USA and Canada. The Florida Panthers issue updates and many reporters, including this page, publish pictorial evidence of its growth. Jagr was talking to his former Dallas Stars teammate and reigning NHL scoring champion Jamie Benn, when Tyler Seguin, another former teammate of Jagr’s from the Boston Bruins 2012-2013 season, joined the conversation.
Another story from the Sun Sentinel and Fiakov:
http://www.sun-sentinel.com/sports/florida-panthers/fl-florida-panthers-all-star-0131-20160130-story.html
The Panthers other day to day reporter, George Richards of the Miami Herald, shared this with links to other stories:
http://www.miamiherald.com/sports/nhl/florida-panthers/article57544608.html

http://www.usatoday.com/story/sports/nhl/allstar/2016/01/30/jaromir-jagr-all-star-nashville-florida-panthers/79563490/?utm_source=twitterfeed&utm_medium=twitter&utm_campaign=DTN+USA:
Today’s stats don’t count but Tuesday’s will when division leaders Florida and Washington clash in DC at Verizon Center. As mentioned above, the Jagr-O-Meter gives a snapshot of Jagr’s place among the all-time greats of the game. 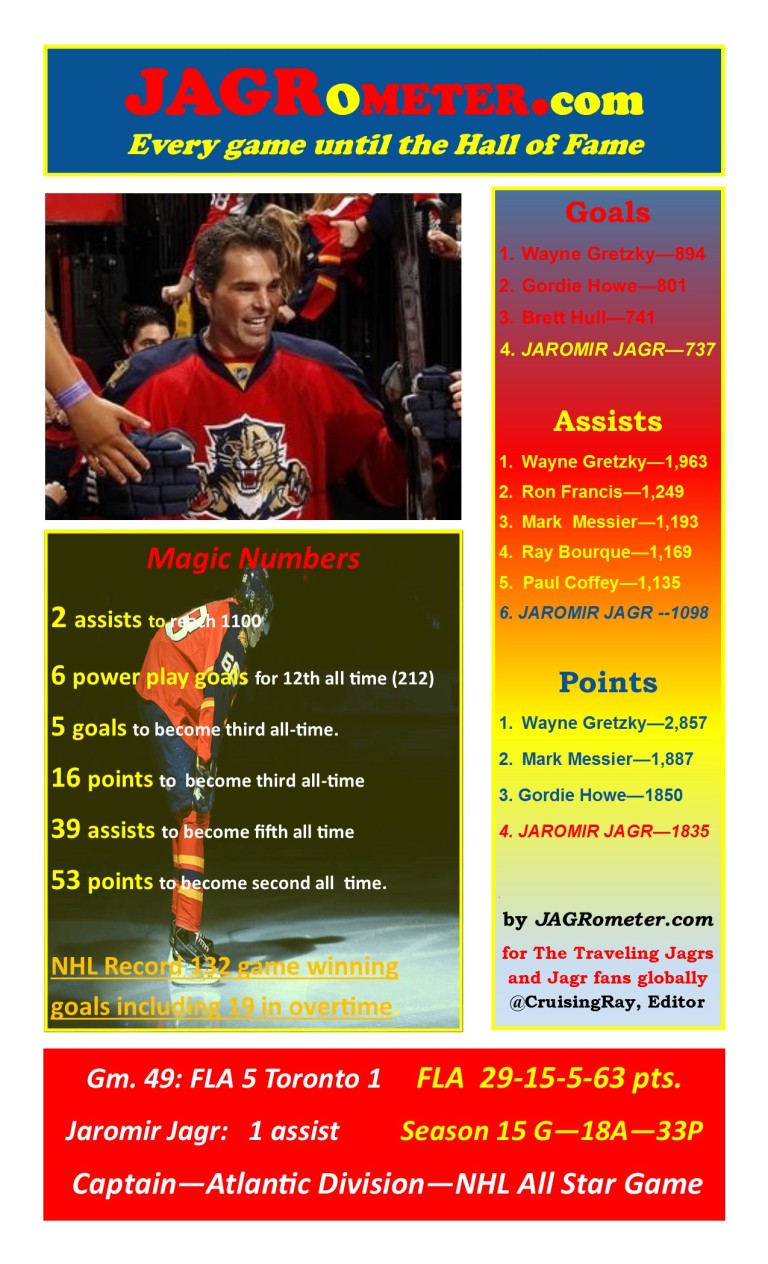