(Special thanks to our many visitors from the Czech Republic. Happy to share Jagr news with you. Come back again soon.

SUNRISE–Concussions and other injuries have taken their toll on the Florida Panthers (33-18-7-72) in recent weeks and the result has been more man games lost than wins. The first place Panthers take a four-point lead over Boston before tonight’s game with the San Jose Sharks (30-20-5) at BB&T Center. The Panthers are 6-3-1 in their last 10 games which projects out to a 106-point season if sustained over the 82-game schedule.

No return dates have been set for first-line center Aleksander Barkov, defenseman Willie Mitchell and Eric Gudbranson, or forwards Brandon Pirri or Quinton Howden. Reconfigured lines paid off with a victory Monday night with a 2-1 victory over the Pittsburgh Penguins. After a few days practice any tinkering by the coaches, the lines should be able to get a few more goals tonight.

There was a second cake created for Jagr’s birthday to go with the Czech/Florida jersey cake. Now all he needs is skates. 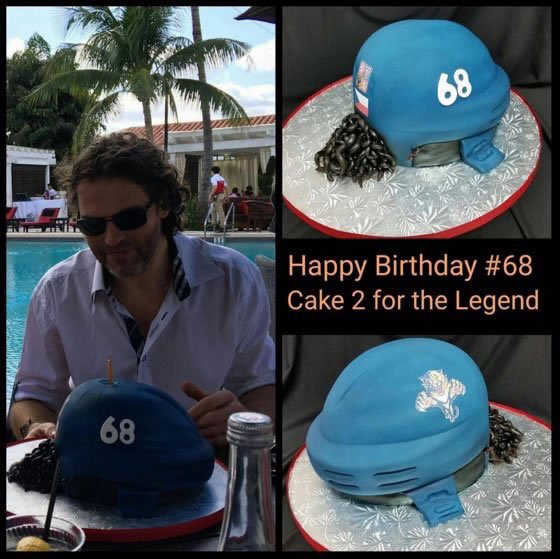 This photo was shared Monday.

Which cake do you like better?
Czech writer Zdenek Janda shared this comment from Hall of Famer Phil Esposito.

Legendary Phil Esposito on ageless Jagr: “I wish he could play forever. Love watching him. He is exactly the type of player I wanted to be.”