SUNRISE–Nazem Kadri scored a hat trick for Toronto Tuesday evening  as the Maple Leafs beat the Florida Panthers by a 5-2 count on Star Wars Night at BB&T Center. Like in the famous movie franchise it was the guys in white who won this game. The loss drops the Panthers to second place behind the Tampa Bay Lightning, who also have 93 points but lay claim to the top spot by virtue of more regulation/overtime wins than the Panthers.

Of concern Wednesday will be the results of  an MRI on the right foot of Vincent Trocheck who made himself vulnerable to injury in a shot blocking attempt in the second period. Trocheck took a couple more shifts after a visit to the locker room but did not finish the game. His loss deprives the Panthers of their dynamic second line center who is currently tied for the team lead with Jaromir Jagr with 25.

.@68jagr discusses the @FlaPanthers loss Tuesday night and the injury to Vincent Trocheck.https://t.co/Ep1SzN9mWJ

Jonathon Huberdeau scored in the first period to tie the game with assists to Aleksander Barkov and Jaromir Jagr. The assist gave Barkov 50 points on the season , the fifth Panther to reach that mark this season. Jagr’s assist restored him as the Panthers leading scorer with 59 points and was the 1114th assist and 1861st point of his career. 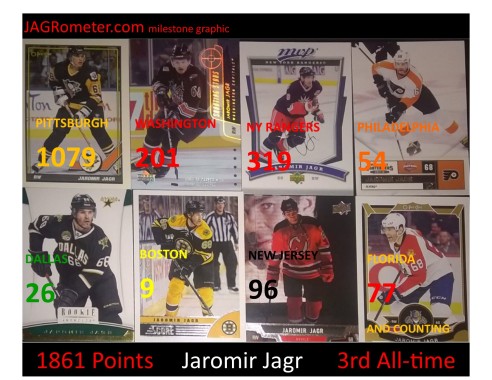 The impressive season of Jaromir Jagr continues. On this exclusive JAGRometer.com graphic we show how Jagr ranks against the entire NHL in various scoring categories as well as against other right wings.

There is a shortage of Panthers highlights in today’s package from NHL.com but they do include the first NHL goal for Greg McKegg who looked like more of a goal scorer than any of the highly-heralded farm hands who have yet to reach the scoresheet despite multiple chances.

Among today’s game photos is this shot of Jaromir Jagr working the puck behind the Toronto net. 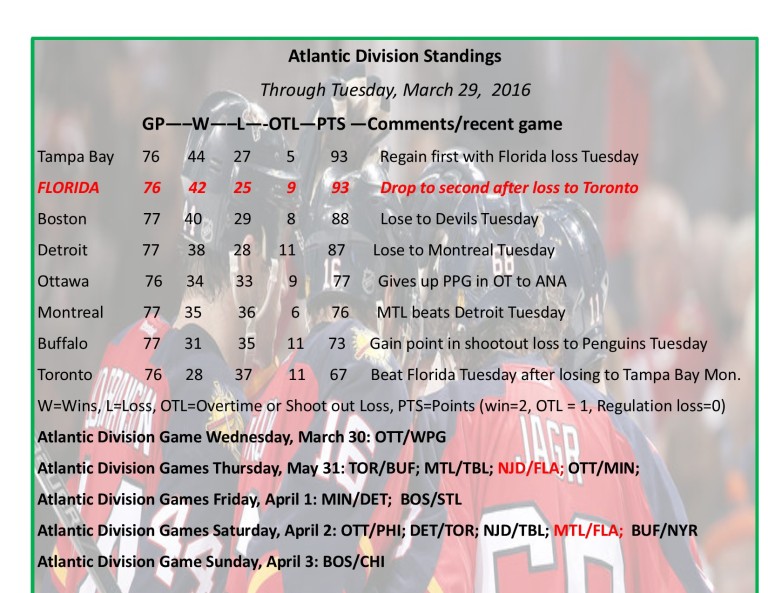 The last game of the three game will be Saturday when Montreal visits the BB&T Center. The Traveling Jagrs will be on board flights from their home base in the Alberta province of Canada for the New Jersey and Montreal games. The games will mark the debut of a the Omsk Jagr, the KHL team Jagr played four seasons for during the lost NHL season of 2004 and the three seasons he left the NHL. If you’re going to the game, look  for these guys, they’re a lot of fun and Jagr approved!

Tickets for the final three Panthers regular season games are available at panthers.nhl.com.

JAGRometer.com is produced by Ray Haluska, AKA Kladno Jagr. Contact him with Jagr questions or news at rokinray@aol.com, Ray Haluska on Facebook, or @Cruising Ray on twitter.