EDITOR’S NOTE:  With the playoff field set after Sunday’s victory by Philadelphia over the New York Islanders, the Panthers will host the Islanders in Game 1 Thursday in the first game of a best of seven series which opens at the BB&T Center. Tickets available from panthers.nhl.com. Follow link for story from the Florida Pantherw website for the entire schedule as well as networks broadcasting the games.

With games Thursday and Friday at BB&T Center and at Barclays Center Sunday, JAGRometer.com advises you to load up on work early in the week so you don’t miss a minute of exciting NHL playoff action.

Also, as an addendum to postgame coverage of the Panthers 5-2 victory over Carolina to close out the regular season is the news that the Florida Panthers booster club presented Jaromir Jagr with the Player of the Year award for the team.

SUNRISE: The sun set on the 2015-16 regular season at the BB&T Center in Sunrise, FL last night with a 5-2 victory by the Florida Panthers over the Carolina Hurricanes. Several players achieved individual and team benchmarks to create excitement in a game that had little drama and no impact on the standings.

Jonathon Huberdeau reached the 20-goal mark after starting the campaign with 4 goals in 39 games. Earlier in the year Jaromir Jagr said not to worry because Huberdeau was a goal scorer. Jagr certainly proved right as Huberdeau scored 16 goals in the final half of the 82 game season. 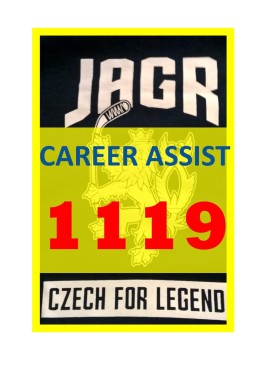 Barkov carries a nine game point streak into the post season. The trio has been one of the NHL’s best all year and it was obvious these players would work well together from their first shift when they were joined by Panthers coach Gerard Gallant after Jagr joined the Panthers from New Jersey minutes before the trading deadline last season. Since that time Jagr has complied  33 goals and 51 assists for 84 points in 98 games played with the Panthers, for a per game average of .857.

Other players achieving milestones Saturday night were Reilly Smith, who collected his 25th goal and 50 point mark. Smith became the fourth Panther to score 25 goals along with Barkov, Jagr and Vincent Trocheck. He also became the sixth player to notch 50 points joining those three plus Huberdeau and linemate Jussi Jokinen. Speaking of Jokinen, with a goal and an assist he completed the second best season of his career with 60 points, tops since recording 65 with Carolina in the 2009-2010 season and joins Jagr as the only two Panthers to surpass 60 points this year.

Highlights of the game from NHL.com can be seen here.

The Panthers final regular season stats can be viewed from the stats page on the teams website, conveniently provided here for you from JAGRometer.com.

But the focus of this website remains on the future Hall-of Famer and his solid season made keeping the Jagr-o-Meter updated a full-time job. The last Jagr-o-Meters of the 2014-15 and 2015-16 season are presented as a reminder of the ground Jagr covered in surpassing fellow hockey legends in becoming the third all time leading goal (740) and point (1868) producer. Each event had a countdown, an occurrence and a celebration.

During the season the Jagr-O-Meter went from being a shared infographic in a horizontal format to a webpage: JAGRometer.com. Shown above are Jagr’s stats at the end of the 2014-15 season. (One correction–Jagr was +7 in 18 games for the Panthers last year. 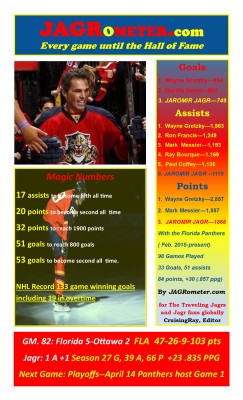 During the 2015-16 season the Jagr-O-Meter went from a horizontal format to a phone/tablet friendly veritical orientation. The stats above summarize Jagr’s milestones in a nutshell.

Other achievements included being the oldest player to lead a team in scoring, surpassing his own mark when he topped New Jersey in scoring with 67 points two seasons ago when he was only 42-years-old. Those two seasons are the best by any player in NHL history over the age of 42.

Some teams like to track the season in 10-game segments. JAGRometer.com did this with the team and Jagr. The legend finished the season strong with 32 points over the last 32 games a testament to his workout regimine when most players are fading as the season ends.

Jagr fans, you are not alone in celebrating this season of Jagr. New York Post hockey columnist Larry Brooks posted that JAGR should get strong consideration as league MVP in this column.

We’ll discuss Jagr’s outstanding relationship with fans in a future edition of JAGRometer.com. For the second season in a row a family Florida Panthers fans have this thrill of a lifetime to share with friends and family. The Panthers are one of several teams to have a “Shirts Off our Back” promotion. Here Jagr poses with the winners of this year’s jersey in these photos from nhl.com.

It’s hard to figure out who is happier, the young lady getting the shirt or Jaromir Jagr removing it.

Names of the family omitted for their privacy but the family poses with Jagr after the jersey presentation.

The Panthers completed the 82-game regular season with a 47-26-9 record  and won the Atlantic division  with 103 points, six more than their injury-depleted cross-state rivals in Tampa Bay.

In a few days an even bigger hockey spotlight will shine on Florida as the Panthers will host Game 1 of the opening round of the Stanley Cup playoffs against an opponent to be determined Sunday evening when the New York Islanders play the Philadelphia Flyers.

A win by the Isles means they will play Pittsburgh while the New York Rangers will be the Panthers fist round opponent, otherwise the Brooklyn-based Islanders will be coming to Sunrise.

SInow.com  had this article on Jagr and the Panthers, the latest in a series of revealing Jagr articles created by national writers this season.

Repeating an article from a few weeks ago, Jagr has figured out the secret to work–make it fun.