NEW YORK–The Florida Panthers finished a four-game road trip with a 3-1 record topped off with Sunday evening’s 3-2 shootout victory over the New York Rangers, who lost two games in a row for the first time all season. The Panthers return home for games Tuesday with Philadelphia and Saturday with Columbus at the BB&T  Center.

highlights from the game can be seen here, courtesy of nhl.com 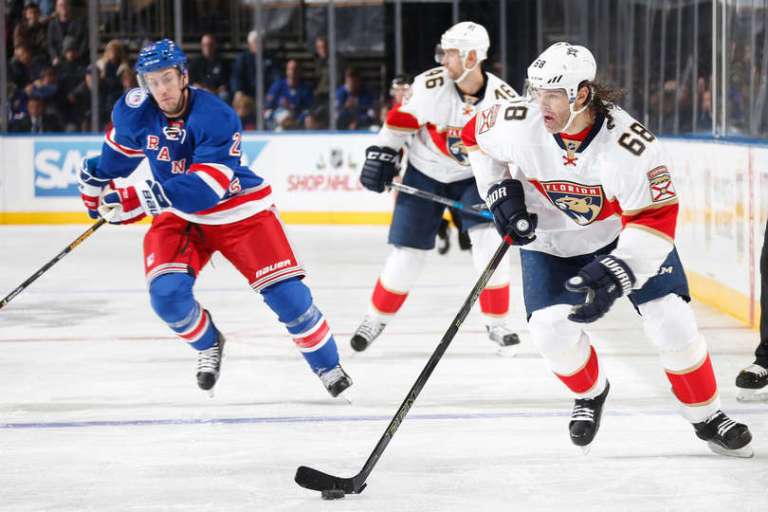 No points on this winning night for Jaromir Jagr but he managed three shots on goal and was skating strong again. About a decade ago, Jagr played for the Rangers. Before Sunday’s  game Rangers play by play man Sam Rosen was honored for his recent induction into the broadcasters wing of the NHL Hall of Fame. Jagr kept Rosen busy when he set New York records for the most goals and points in a season.  Rosen and other well known NHL voices can be heard in this fan produced video from youtube.

NHL.com published an article about Jagr’s willingness to adapt as a reason he continues to play at an age when most players have retired 10 years earlier.

Tickets for all Panthers home games can be purchased through panthers.nhl.com. As we head into Thanksgiving week, a look at the Jagr-O-Meter. A few milestones stand before Jagr in the coming weeks. Most significantly, he is only 10 points behind Mark Messier as the NHL’s second all time leading scorer. Jagr stands at 1877 points as the Panthers head into action against Philadelphia Tuesday night.