SUNRISE–A rare three day break from games sandwiched around the Thanksgiving holiday may provide the reset button the Florida Panthers need to improve their play and challenge for their second straight Atlantic Division title.

As they prepare for a Saturday Night of Columbus game at BB&T Center,  the Panthers are fifth in the Atlantic Division and fourth in the Eastern Conference wild card race, with the Blue Jackets holding a four-point advantage for the first wild card slot and the third place Ottawa Senators holding a similar edge in the Atlantic.

Slumps and injuries have handicapped eight of last season’s top nine forwards. A team is the sum of its parts and through the first 20 games some major components have been malfunctioning.

Jaromir Jagr is on pace for 8 goals and 36 points, a respectable total for anyone over 37, but a far cry from his team-leading 66 points of last season and a meager output for someone who has spent a quarter-century creating offense as a professional player.

Top-line center Aleksander Barkov hasn’t scored since Game 2 and is also on pace for eight goals and 45 points, a far cry from the 28  goals he deposited last year when he edged Jagr by one tally for the team lead.

The usually dynamic duo have struggled with  a rotation of substitutes for injured Jonathon Huberdeau who will likely be out until late February from a pre-season leg injury suffered in the game at West Point against the New Jersey Devils.

Also stifling the pair is the stubborn retooled defense corpse (sic) that too often turns accomplished puck carriers like Jagr, Barkov, Reilly Smith and Vincent Trocheck into third and fourth line puck  chasers at the expense of the forward’s game breaking talents.

Panthers beat writer George Richards of the Miami Herald recnetly talked to Jagr and Barkov about their struggles. Follow the link for his recent story on their struggles… 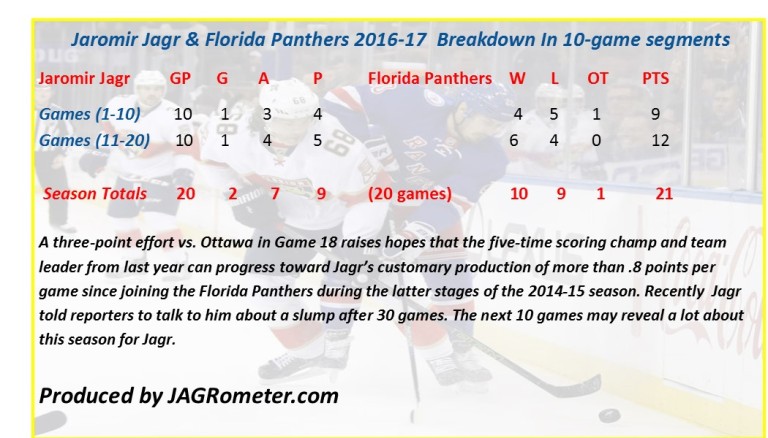 SLUMPS AND INJURIES ON LINES 2 AND 3

The scoring problems permeate throughout the Panthers lineup.  Smith weighs in lightly with four goals, which projects to 16 for the season to go with 28 points. Jussi Jokinen and Nik Bjugstad both scored more than 10 goals season but are only in the last week returning from injuries that kept them out of the lineup  most of the season. Of the returning forwards only  Trochek’s 6 goals put him anywhere near the production of his breakout season a year ago and his production if maintained projects out to 24 goals and 52 points.

Bright spots offensively for Florida have been newcomer Jonathon Marchessault who leads the team with 9 goals and 7 assists, which projects out to 36 goals and 64 points,  astounding production for a player picked up for pennies on the free agent market.  Rookie Denis Malgin has also impressed with four goals and four assists and the 19-year-old is making good on his chance to be the Panthers rookie of the year and hope for the future. Colton Scevior also has five goals but has proven to be a defensive liability at times, at -4. .

As for the defense, Florida gutted their defense corps of 5 starters and the replacements rarely put forth a 60-minute game nor do they seem to have any familiarity with duties required of an NHL defenseman. At times they might be helped with a dry erase board projected on the scoreboard to help them position themselves. Any good defensive plays are more of an accident than intentional and their horrid defensive play in front of their goalies is further handicapped by their lack of demonstrated courage and skill to make competent passes to fast-moving  forwards on the breakout as they employ a hot potato style of puck handling. Rarely do they cleanly secure a puck as they retreat into the defensive zone creating an abundance of exciting chase scenes with opposing forwards.  Only Keith Yandle has shown signs of catching on to be serviceable on the breakout, though a few of his long passes have missed the target resulting in icing calls. Some scoring lately has Aaron Ekblad up to five goals but still no assists.

It was hoped that between Yandle and third-year, two-time All Star  Ekblad that Florida would be a force on the power play but neither has proven to be a good quarterback for this team. The solution might be to let the high calibre forwards run the power play from the board or the high slot and for the defensemen to be ready for their chances.That way any muffs or overpasses can be kept in at the blue line by the point men rather than yielding breakaways to opponent’s penalty killers.

Without hope, why keep on living? The Panthers keep themselves close to the playoffs playing the way they are now, or move up the standings if even half of their struggling eight forwards produce as expected by fans and themselves AND the defensemen pay attention to their job description at least part of the time. Ekblad is too good to be the team minus leader at -7 and his track record and goal scoring coupled with some assists should get him back to normal by the end of 2016.

TIME FOR THE CHARTS

Jagr enters action tonight within 10 points of #2 all time scoring leader Mark Messier’s 1887 points. It would be nice present for the hockey world for him to reach that step on the scoring ladder during this holiday season.

The JAGR-O-METER tracks Jagr’s progress as he raises his standing among the fellow jegends of hockey.

One turkey and many leftovers ago, PHI 3-FLA 1.

Highlights and stats of Tuesday’s game with the Flyers from nhl.com…

While interesting we hope the next 25% of the season provides more thrills and excitement than head scratching as the Florida Panthers and the legend continue.