SUNRISE–Playing at home has become a chore for the Florida Panthers in recent weeks, with a 2-2-4 record following Wednesday’s dismal 4-1 loss to the Winnipeg jets.

Craig McKegg had the only goal for the Panthers, who were outshot 39-30 despite trailing more than half the game. The Panthers learned the hard way about sustaining pressure with the lead as the Jets never took their foot off the gas.

Highlights and extended coverage of the game from nhl.com can be seen here…

Jaromir Jagr recorded his 1136th career assist on the McKegg goal and is now fifth all-time.  The coal sliced the Jets lead in half but that was the last time the Panthers would score. It was also Jagr’s 1892  career point, leaving him eight shy of 1,900. 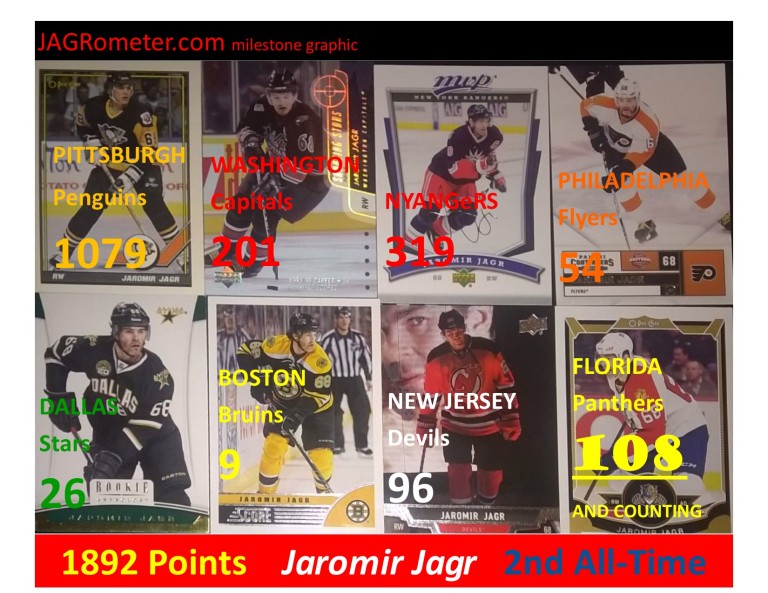 The Washington Capitals needed an overtime goal by Alex Ovechkin to close out a comeback victory Tuesday night against Toronto. It was Ovechkin’s 19th career overtime goal, tying Jagr for #1 all-time.

A few things have enabled Ovechkin to catch Jagr

An Open Letter to Panthers management

Play Jagr in overtime. The Flyers did it, so did the Stars, Bruins and Devils. In years of watching Jagr, jagrometer.com  can’t recall a single instance in which he was on the ice for an overtime  goal against since the 3-on-3 was adopted or that often before. We share the proof from youtube. The rest of the game adapts to his speed, he can get a shot or a pass off while being defended by one player instead of two. Play the man!

Fans attending the Panthers game will not only get a commemorative t-shirt, they’ll also witness ceremonies and tributes honoring the NHL’s second all-time leading scorer. Speical ticket pricing is also available and tickets can be purchased securely through panthers.nhl.com.

After Nashville Friday, the Panthers host Boston Saturday at BB&T Center.Then they  play Monday at New Jersey  and Wednesday at Brooklyn.

Stay with jagrometer.com for the latest Jagr news as the Legend Continues….