LOS ANGELES–While Jaromir Jagr would choose rest or practice than travel across the country for ceremony, he was invited and attended the gala celebration  for the 100th anniversary of the NHL and was named among the NHL’s 100 all-time players.

The list is unranked but the NHL’s second all time leading scorer with 1897 points has a third-best 758 goals and fifth-best 1039 assists in a storied career that has spanned five US Presidents, multiple NHL lockouts. Jagr became the marquee player in the upstart KHL back in 2008 when the NHL’s game of musical chairs, the free agency period, left him standing without a seat on any NHL team’s bench following a season that saw him collect 79 points for the New York Rangers.

The foundation of the legend was crafted during his 11-year tenure with the Pittsburgh Penguins and during the festivities Jagr’s former linemate, Mario Lemieux told reporters that one day Jagr’s #68 will hang from the rafters of PPG Paints Arena.

Lemieux and Jagr stood side by side in a picture with the other Penguins honorees to the all-time 100, which included Bryan  Trottier, Paul Coffey, Sidney Crosby, Ron Francis and Luc Robitaille. Jagr played with all of them but Crosby, who inherited the Captain’s C previously worn by Lemieux and Jagr.

NHL.com had a story which included a must-see video dedicated to Jagr’s career and his inclusion on the top 100. Follow the link.

All Star weekends are a  lot of fun, especially if you can get to the festivities. Jagr’s girlfriend Veronika posted this picture of the couple on her instagram page.

A rare picture with Sidney Crosby, Jaromir Jagr and Alex Ovechkin in it.

It wasn’t 50 funny Jagr moments but this video provides some laughs.

The Panthers ended a four game losing streak with a 2-1  OT win Jan. 26 over Tampa Bay. Jagr was held without a point in either game and during the Lightning game was given a softball to sit on which he uses therapuetically to treat muscles on the bench during a game. Perhaps the rest from the All-Star game will enable the legend to get any problems rectified by Tuesday game with Ottawa at BB&T Center.

Highlights and links from nhl.com

The Panthers dropped a 3-2 OT loss Jan. 23 to the Coyotes at Arizona. It was the end of a disastrous 0-3-1 road trip for the Panthers. Highlights and links from nhl.com.

Following Tuesdays game with Ottawa the Panthers host Anaheim, Friday, Feb. 3 at BB&T Center, then will be idle until a game with Los Angeles Thursday, Feb 9, also at BB&T. Tickets for these and all Panthers games are available at panthers.nhl.com.

The Panthers have 52 points, and trail Boston for third in the Atlantic Division with two games in hands on the Bruins. Philadelphia holds the second wild card spot with 56 points through 50 games, same amount the Panthers . Of concern is the Toronto Maple Leafs, an obstacle for both the nearest division and wild card slots and three games in hand. A half dozen Eastern Conference hopefuls trail the Panthers by three or few points. Making up lost ground will be difficult without severely outproducing the teams ahead of them.

The Panthers have played 50 games. We track both Jagr and the team in 10 game segments.

Other than 1900 points and 1700 games, there won’t be many celebrations that NHL, Panthers and Jagr fans have enjoyed over the last two seasons. Regardless, the Jagr-O-Meter will continue to track Jagr’s performance as the season continues. 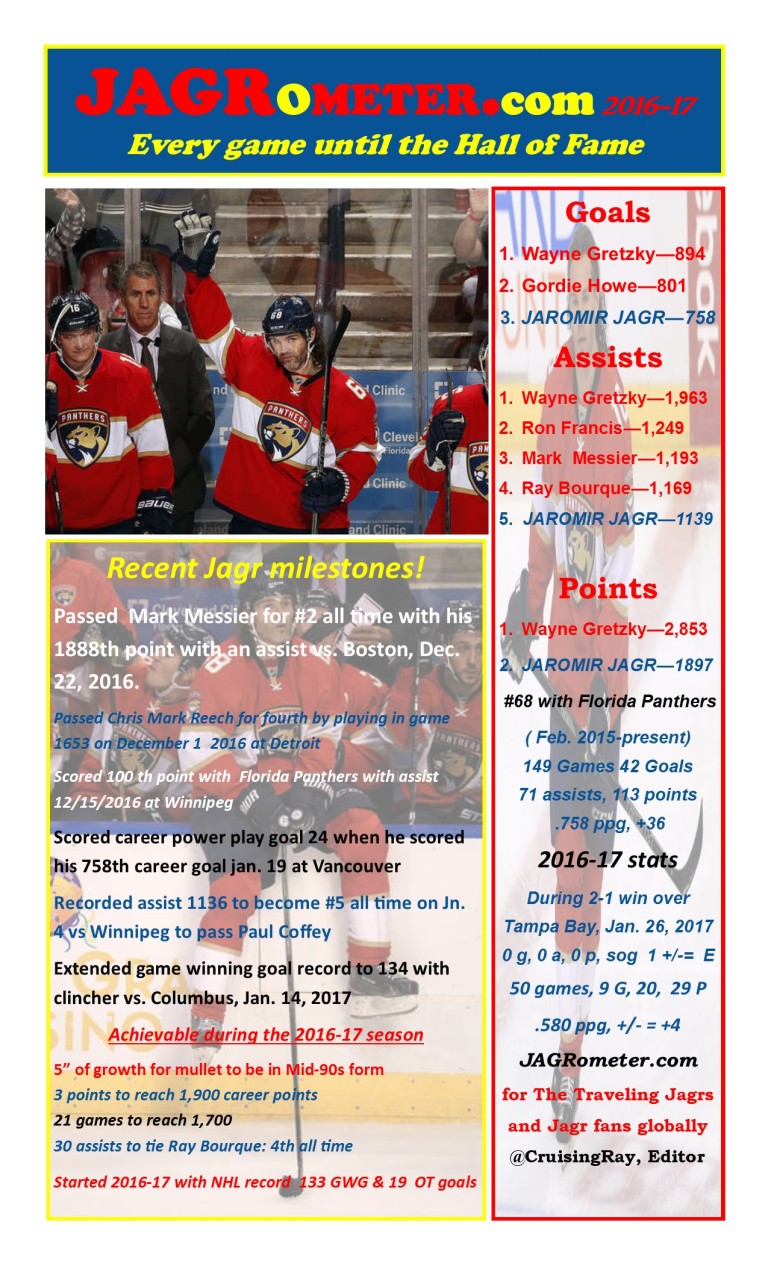 Stay with jagrometer.com as THE LEGEND CONTINUES

jagrometer.com is produced by Ray Haluska, who covered the first few seasons of Jagr’s career for a Pittsburgh suburban newspaper. Also noteworthy was his inclusion among those acknowledged at the front of the 1997 autobiography “Jagr” by Jan Smid. The Jagr-O-Meter and jagrometer.com were created for the enjoyment of Jagr fans around the world as Jagr continues to be the NHL’s living, playing legend. Contact Ray at rokinray@aol.com, on Twitter @CruisingRay or on the comments section of this website.