CALGARY–The Carolina Hurricanes (2-1-1) are the Calgary’s opponent for the first of two home games in a light week of action for the Flames (4-2-0). The Saturday night special sees the Flames hosting the Minnesota Wild. Puck drop shortly after 9 pm EDT, 8 pm CDT, 7 pm local time in Calgary and 6 pm on the West Coast of North America. 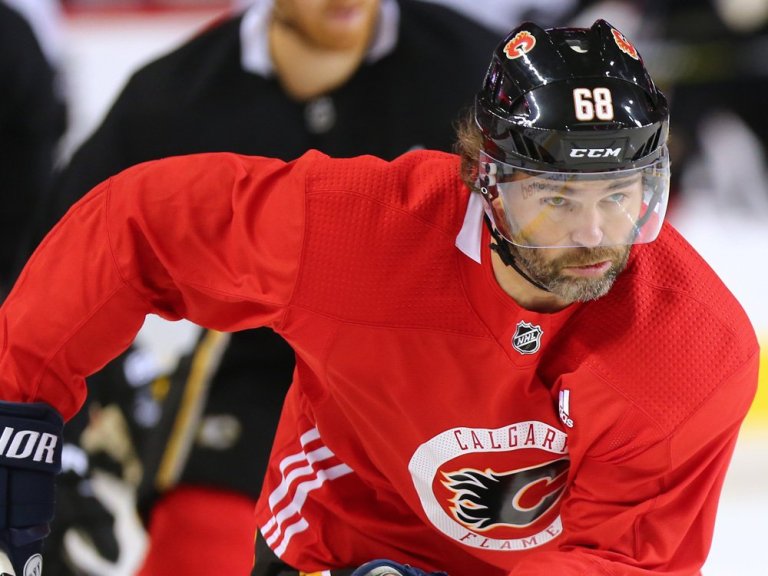 It’s a long season and the legend is making it interesting for fans and players in Calgary. Also from flames.nhl.com

Calgary has been idle since a 5-2 win Saturday night at Vancouver. Jaromir Jagr grabbed his first point with the team, assisting on Johnny Gaudreau’s power play goal with a quick return pass. With four days off since their last game, Calgary has had plenty of time to practice. Jagr has practiced on the top line with Calgary with Gaudreau and Sean Monahan and will start with that younger duo tonight.

In recent years Czech fans, either visting from Europe or USA-based, have been seen wearing the #68 Czech national team jersey, wearing wigs like the Travelling Jagrs and waving the Czech flag.  Most arenas will allow the flag if you wear it as a cape. Please visit the USA or Canada this year and feel free to write to me for advice on planning your trip. Air BnB is popular for those trying to get the most of their travel budget. Most NHL cities have other interesting things to visit to supplement your vacation to the USA and Canada with enriching experiences.