UPDATE:  Not unexpectedly, noon came and went and Jaromir Jagr is a free agent as no NHL team claimed him within 24 hours of the Czech legend being placed on waivers Sunday, Jan. 28J by the Calgary Flames.

The last member of the NHL draft class of 1990, who used to tear around the ice in the Civic Arena  as fast and carefree as he drove around the hills and highways of Pittsburgh in his Camaro at the start of his career, has become a classic over the decades. The cold of Calgary was seemingly not as good for his performance as the warmth of Florida. Sunday’s move means the Flames are parting way with the classic muscle car they’ve kept in the garage since Jagr’s last game Dec. 31 against Chicago at the Saddledome.

Jagr’s career stalls with a third-best 1733 games played, third best 766 goals scored, fifth best 1,555 assists and second best all time 1921 point in a proflific career that started for the Pittsburgh Penguins in 1990.

Since that time no deal to trade the injured Czech legend to an NHL team has transpired. Dreamers in NHL cities best not get too hopeful anything happens Monday morning. If unclaimed Jagr will return to Europe and play for Kladno, the team he owns in the Czech Republic. However one report out of Canada suggests Jagr could end up with Frolunda in the Swedish league. It is likely the only way he can get back into the NHL. Get healthy, play abroad and show something an NHL general manager will decide to put in the showroom of their arena for another spin.

Jagr or his people are often prone to leak information to the Czech media before North American reporters and those outlets reported some of the news Sunday afternoon. Translate as necessary.

Another article from republic.

It has been an odd turn of events for Jagr since the end of his 46-point campaign in 2016-17 for the Florida Panthers. That team in transition decided to part ways with Jagr and three other experienced players, grossly overrating the readiness of their AHL talent to compete in the NHL. The Panthers continue to struggle under first-year coach Bob Boughner.

The Panthers backed away from  promises to offer Jagr a new contract shortly after Boughner was hired in June. A summer of free agency didn’t produce a contract with Jagr until the season was about to start. While the Flames opened on the road Jagr was arriving in Calgary for a press conference to sign his one-year deal with Calgary. Jagr missed the first three games trying to make up for missing training camp with his new team. After playing a games with the Flames he was out of the lineup with what the team called a “lower body injury.”

Through his career Jagr has periodically suffered groin injuries and usually recovered from them. Over the next few months of this 2017-18 season Jagr was in and out of the line up, recording one goal and six assists in 22 of Calgary’s 49 games leading to the All-Star break. Jagr was incredibly durable in recent years, missing only 11 games in the last five seasons COMBINED.  As for suggestions he didn’t train as hard for this season due to his contract situation, he was set to play for Kladno the weekend before the NHL season started but was held out of action as contract talks between Jagr, the Flames and St. Louis started to gain traction. He would not have played for Kladno if he wasn’t in game shape.

Flames all-star wing Johnny Gaudreau and Sidney Crosby talked about Jagr to the a Canadian reporter during the just completed all-star weekend in Tampa.

For now, Jagr’s last goal came in a win over Detroit and was set up by Gaudreau on a nice two-on one break.

So, for now, Jagr’s stats remain frozen as shown below on the Jagr-O-Meter.

The Traveling Jagrs chimed in on Calgary’s tenure with the Flames. 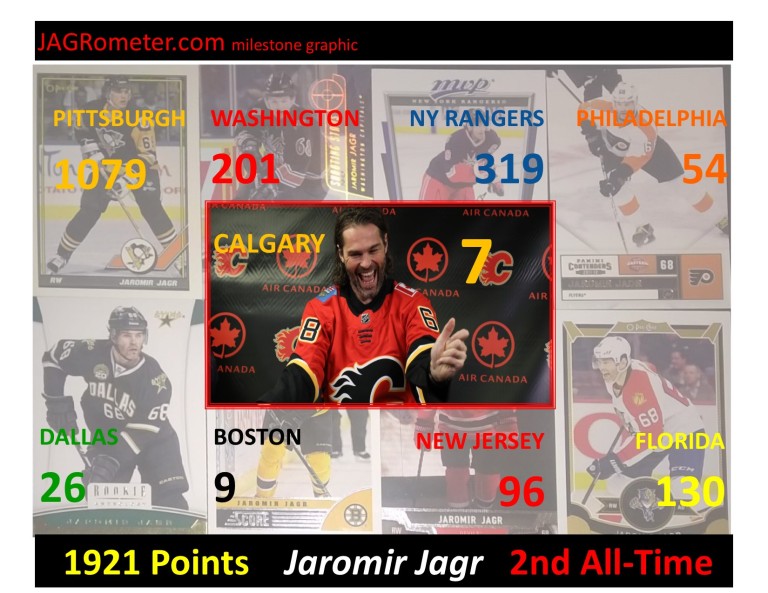 Jagrometer.com will continue to publish summaries, links and graphics from wherever Jagr resumes his career.