KLADNO–In his first facebook posting since September, 2017, Jaromir Jagr apologized to reporters for not meeting them at the airport and advised fans buying tickets that the excitement for his arrival caught him off  guard. The legend also advised fans that if they follow through with plans to buy tickets to understand he may be playing only a shift or two a game to participate in enough games to qualify for the playoffs.

From Jagr’ facebook page, one of the longer comments he’s ever posted.

Without games photos we can share a few of the interesting photos that appeared on twitter postings talking about Jagr.

A medical examination looms as  the final administrative hurdle to get official clearance to play, Jagr confirmed he’s been battling a knee problem for nearly two months, explaining the knee brace photographed at his locker for the Calgary Flames and confirming what long-time Jagr observers suspected.

Here’s the link from the Czech Republic’s source for news, Denik Sport. Translate if necessary.

Until the end of time stories about Jagr and his accomplishments and his activities off the off will come out. This article discusses some of his times in Florida, including one chilling between periods ritual.

Some more on his time with Calgary.

Even from Pittsburgh, a writer calls for the few holdout angry fans to appreciate Jagr’s time with the Penguins.

As has been reported for several days, there’s great excitement for the return of Jagr to the Czech Republic. One reader of this site shared this on twitter which about sums up the sentiments of many.

Invisible Jagr. Is he in Prague? Hockey sticks and bags with the Calgary logo yes! Welcome back, hero @68Jagr! 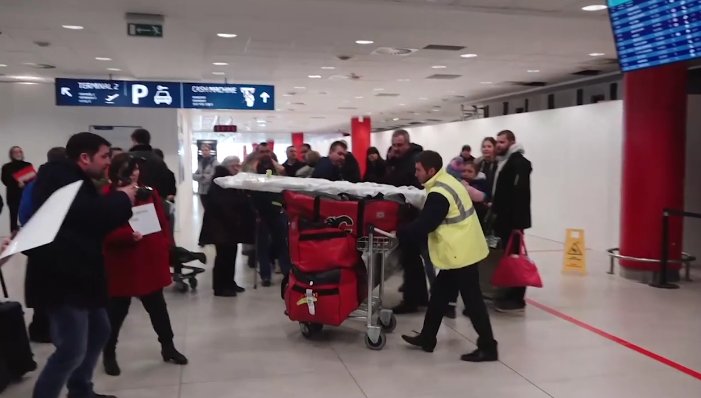 The latest Jagr-O-Meter. A new Kladno version will be created later this week.

Stay with Jagrometer.com as THE LEGEND CONTINUES