The Florida Panthers play three home games at BB&T Center this week. Tuesday night the Colorado Avalanche (2-4-1) visit, having scored 19 goals vs. 21 against on the season and are last in the Pacific Division. The Panthers are 4-3-1 and have scored 26 and allowed 17 and are currently third in the division behind undefeated Montreal and state-rival Tampa Bay. The Panthers adapted well in their first game without Aleksander Barkov. Unlike previous seasons Florida has some depth at center and will need more efforts like Saturday’s 6-2 win at Dallas. The Sun Sentinel of Fort Lauderdale Panthers writer Harvey Fialkov (@hfialkov) reports injured Panthers center Barkov should miss three to four weeks recovering from a broken hand injured blocking a shot Thursday against Chicago. 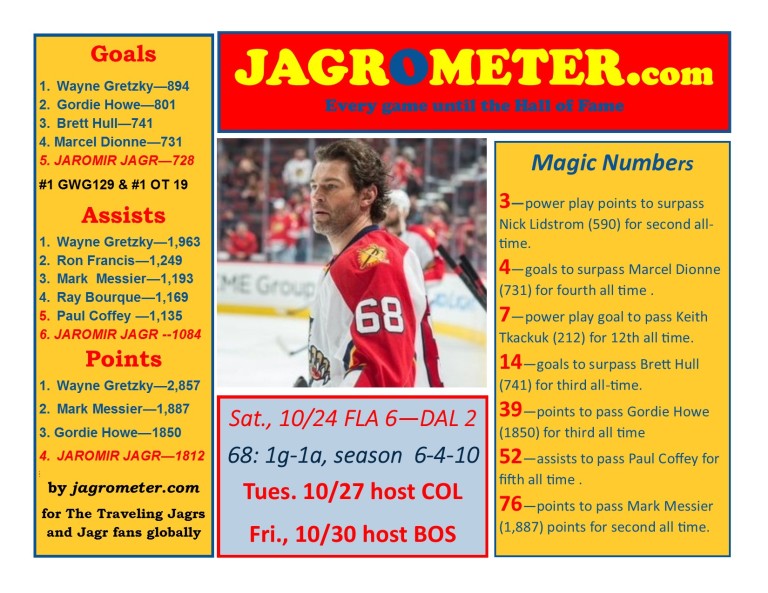 As the Panthers return to action Tuesday night, Jaromir Jagr enjoys a high ranking among the NHL’s scorers and there’s a big group of players off to a strong start this season.  Stats courtesy of quanthockey.com, an easy loading site that sometimes is updated faster than nhl.com. I’ll be trying to correct the display of the rank and age columns on the left side of the charts.

Later this week Florida hosts Boston Friday, Oct. 30 and hosts Washington Saturday Oct. 30.  I’ll be in attendance for both the weekend games. Seats for these and all Florida Panthers home games can be secured at http://www.floridapanthers.com.  South Florida is a great place to visit during the winter and the BB&T Center is a fun place to watch a game. You can’t beat a day at the beach followed by an evening of hockey. If you’ve never been to the area before, write to me at ROKINRAY@aol.com and I can help you set up an enjoyable trip to Fort Lauderdale. I also have friends in the travel business  who can assist with travel, accommodations, land-based excursions or even a cruise.

Due to the growing number of readers from Europe, it will be a priority to start my post-game coverage after Panthers games so you can check out the latest Jagr news before going to work. Our visitors include people in: USA, Czech Republic, Canada, Sweden, Brazil, European Union, Germany, Finland, Costa Rica, Switzerland, N0rway, Greece, the United Kindgom and the Isle of Malta.

Thank you very much for visiting jagrometer.com.