VANCOUVER–Chron0logically it was the good, the bad and the ugly for the Florida Panthers as they dropped a 3-2 overtime loss to Vancouver Monday night.

The good was the start, a 2-0 lead early in the first period on goals by Jussi Jokinen and Jonathon Huberdeau.

The bad was losing a 2-1 lead with minutes remaining, then losing the game on a Vancouver power play goal by Daniel Sedin in overtime.

The ugly was a lot of pushing in shoving in front of the team benches after that game-deciding goal, which triggered some post-game trash talking that result in heated words and almost a bench clearing brawl.

While their winning streak ended at 12, the Panthers did pick up a point, making it 25 of a possible 26 in their last 13 games. With Los Angeles beating Detroit in regulation, the Panthers padded their lead over the Red Wings to 6 points.

Florida plays the fifth game of their six-game road trip Wednesday in Calgary.

#ChasingGordie1850: With an assist on Jonathon Huberdeau’s goal, Jaromir Jagr collected his team leading 32nd point of the season. It was Jagr’s  1097th assist and 1834th point as he continues his chase for Gordie Howe’s third all-time best total of 1850.  In overtime Jagr took a two-minute hooking call in a game where only three penalties were whistled. It was a reasonable call in a game where most infractions went unpunished.

Highlights of the game from nhl.com can be seen here: 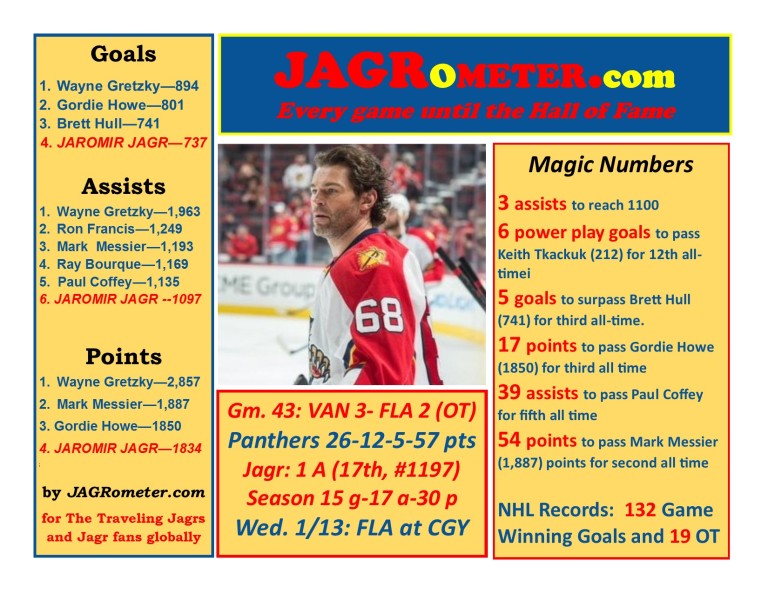