SPECIAL PROGRAMMING NOTE:  The Panthers play the Denver Broncos in the Championship of American Football. Since Jagr plays for the Panthers, JAGRometer.com supports the Panthers today.

SUNRISE–During the NHL All Star weekend it was revealed that Kris Letang had Jaromir Jagr as one of his role models when he was a child. Saturday night Letang was the Pittsburgh Penguins hero as he had two goals and an assist as the Penguins beat the Florida Panthers 3-2 in overtime at BB&T Center.

The Penguins  scored two goals in the final six minutes then won the game in overtime with Letang’s power play, game winning goal. Also standing out for the Penguins was Sidney Crosby, who had a goal and two assists. The reputed best player in the world closed the gap between him and NHL scoring leader Patrick Kane to 26 points with his latest fine effort.

Not to be forgotten is Pittsburgh backup goalie Jeff Zatkoff, who stopped 42 of 44 shots, including six stops on Jaromir Jagr. Panthers goals were scored by Jussi Jokinen and a nice shorthanded breakaway score by Aleksander Barkov, who scored his 16th of the season to tie Jagr And Reilly Smith for second in goal scoring on the Atlantic Division leading Panthers.

Photos and video from nhl.com.

The highlights from NHL.com can be seen here:

Both teams played without important players. Center Evgeny Malkin and starting goalie were out for Pittsburgh. The Panthers frequently-teamed shutdown defensive pair of Eric Gudbranson and Willie Mitchell were out with injuries.

The Panthers play at Detroit Monday night. If Jagr plays it will be his 1600th career game. Florida visits Buffalo Tuesday.

After that late loss, here’s a feel-good picture in honor of the Super Bowl and Joe Greene’s famous shirt off his back Coke commercial.  Here Jagr gives a stick to a kid during warm ups. As a bonus, a mullet update.

Hair we go again. In addition to making the case that hair growth equals excellence for Jaromir Jagr, the article makes some good points about the excellent season #68 is having for the first-place Florida Panthers.

USA Today makes the case that Jagr should be the recipient of this year’s Masterson Trophy, awarded to the player who dedicates perseverance and dedication to hockey. The writer does a good job explaining the varying contrasts that add up to one of the NHL’s best feel-good stories this evening. 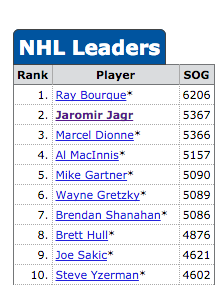