SUNRISE–The Florida Panthers hoped Mullet March would be a charge to the playoffs but a disastrous 2-7-1 leaves them all but mathematically eliminated from the playoffs and the Traveling Jagrs won’t be making it to Sunrise this spring after all due to logistical issues.

That doesn’t stop the legend Jaromir Jagr from challenging himself and anyone else to be be the best they can be. At midnight he posted a challenge on facebook that few people can do. Scroll down the page. He’s on the ice wearing tennis shoes. It’s in Czech, but the video explains it all.

After collecting goals against Tampa Bay and Minnesota, he’ll see if he and Aleksander Barkov can rejoin forces with Jonathon Huberdeau as the Panthers try to snap their four game losing streak against the Toronto Maple Leafs at BB&T Center.  Jagr needs one point to tie Gordie Howe’s NHL record of most points record of 268 points recorded after age 40.

With 15 games remaining the Panthers trail Toronto by 7 points in the standings for the final wild card spot with three teams also in the way. Qualifying would require rising to the occasion as they have yet to do all season and a monumental collaps of FOUR teams ahead. The most entertainment Panthers fans can hope for is that of the team as a spoiler and for pending free agents to show the Panthers management and other teams they want to play in the NHL next year. Jagr is one of those pending free agents and the Panthers fourth leading scorer should attract interest in Sunrise and elsewhere but a strong finish will only  increase his options.

Highlights and stats of Florida’s loss to Tampa Bay from nhl.com

Cutting to the chase. Here’s the Jagr goal, his 14th of the season and 763rd of his career. 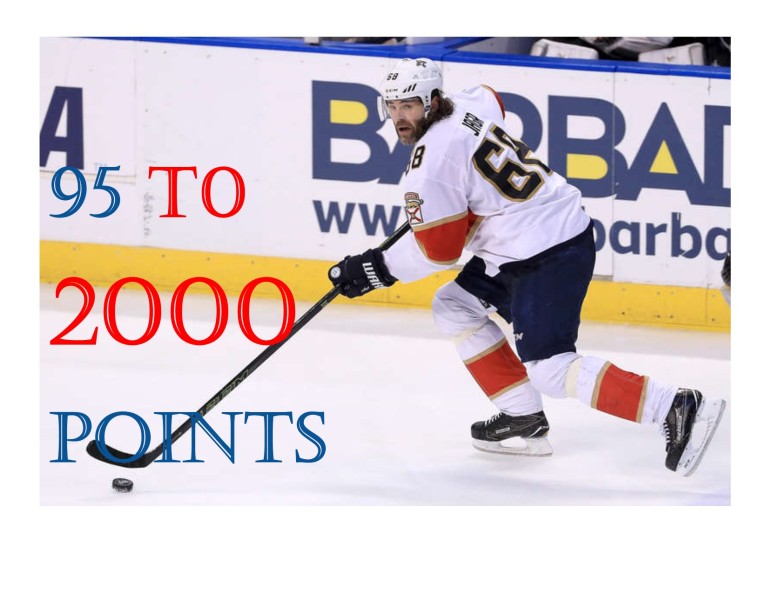 A close game slipped away as the Minnesota Wild added two empty net goals to collect a 7-4 win over the Florida Panthers Friday night at BB&T Center. Jaromir Jagr came down the left wing boards, circled the net and scored from then end line in the right wing corner to tie the game at 3-3 in the second period but it was another frustrating night for the Panthers.

Highlights and stats from Wild’s Wild 7-4 win over Florida from nhl.com

The Jagr goal, reminiscent of one he scored for the Czech Republic vs. Finland in 2015 World Championships.

Jagr’s next significant plateau is career game 1700, which he will reach Saturday at Pittsburgh, where his storied career began in 1990. Ron Francis is third all-time with 1731 games. Gordie Howe tops the list with 1767, while Mark Messier is second with 1756. If he stays healthy and returns to the NHL as anticipated, Jagr will top the list by the end of next season.

The Panthers play at Columbus Thursday, at the Rangers Friday, and at Pittsburgh Sunday afternoon. Jagr will also be be doing a paid signing for TSE, Saturday, March 18 at the Mall in Robinson. For details, follow the link:

Keep up with #68 at Jagrometer.com as…THE LEGEND CONTINUES!