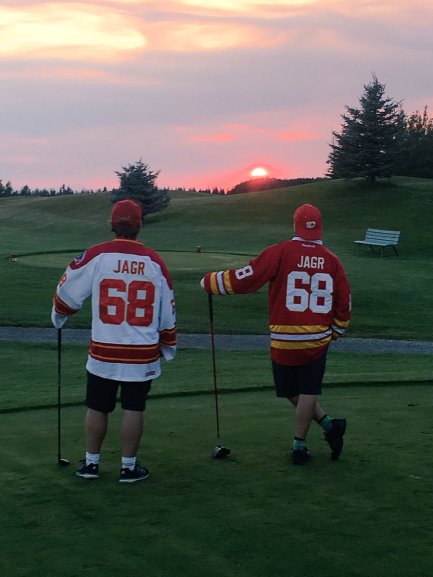 During the summer hockey fans Hambley and Hanson bought Jaromir Jagr hockey jerseys with unwavering faith that their Flames would sign him. The sun will not set for yet another season of #68 in the NHL. 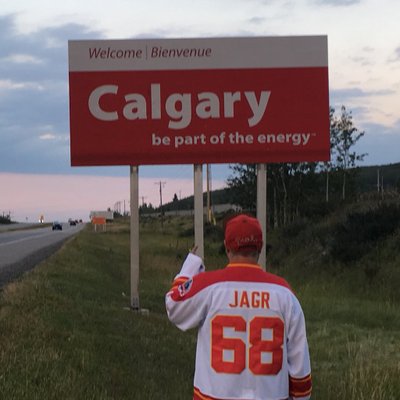 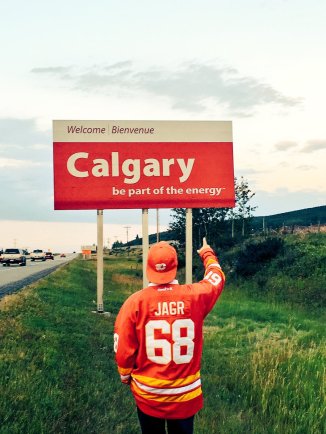 Special thanks to @SaddleUpJagr aka Hambley&Hanson for photos of their “Beat the Rush”  Jaromir Jagr Calgary Flames jerseys.

(CALGARY, Alberta, Canada) — A team in a town known for cowboys rustled up a pretty good deal  on a five-time scoring champion.

The Calgary Flames and Jagr  agreed on a one-year deal, Jagr’s 24th in the NHL, that will pay the Czech legend $1,000,000 and an additional $1,000,000 if bonuses are met. In past deals the bonuses were based on games played, which the durable Jagr has always achieved. It will be Jagr’s ninth NHL team and his first in Canada.

Lost in some of the hoopla of the day was Jagr’s comment after a workout in Kladno that this season with Calgary is “almost 100% my last season in the NHL,” according to the nhl.com story released Monday evening. Talk about burying the big news of the day. Time to plan the farewell tour!

The official announcement  is expected in the coming days pending resolution of immigration issues related to Jagr being based in Canada, which requires different visas than a European player signing with a USA-based team. Jagr will certianly miss the Flames opener at Edmonton Wednesday, but hopes to be ready for action Saturday for Calgary’s home opener against Winnipeg.

The potential $2 million deal is Jagr’s lowest since his return from the KHL in 2011 when he was lowballed by the Pittsburgh Penguins. Eventually he signed for more than $3 million for that season with Philadelphia.

All summer the question of why Jagr hadn’t signed yet was debated by hockey fans. When a higher offer did not come, Jagr chose the team that had talked to him frequently throughout the offseason. Even a rash of training camp injuries around the league could not get the price up for hockey’s second all-time leading scorer with 1914 points. Jagr’s pursuit of additional glory in the NHL’s record book will come at a reduced price this season.  Jagr finished the 2016-17 season with 1914 career points for the Florida Panthers recording 46 points, one season after leading the 2015-16 Atlantic Division leading team with 66 points.

The 82 game season is long, but good health and good play will enable Jagr to top Gordie Howe for all times games played in the NHL. With thoughts of this being his last NHL season, a  strong campaign may be the only thing that brings Jagr back to pursue 2000 career points and work inch his way further up the all time goals and assist lists.

For our new readers in Calgary, the Jagr-O-Meter is published after every game and updates Jagr’s stats and shares Jagr news so you can keep up with the legend.

A Flames blog analyzes what the Jagr signing means for Calgary.

Much more to come after the official announcement. Until then, remember…

Jagrometer.com is the home of the Jagr-O-Meter, tracking Jagr’s post-KHL career in the NHL. Links to articles are provided to stories written by some of the top writers covering the NHL by site editor Ray Haluska, who has followed Jagr’s entire career and was an acknowledged adviser for the 1997 biography, “Jagr” by Jan Smid. Ray is also associated with The Travelling Jagrs, whose appearances at NHL rinks in recent seasons have added to the humanizing of the NHL’s living, playing legend. Comments welcome at the box below, or write Ray at @CruisingRay on twitter or e-mail ROKINRAY@aol.com.